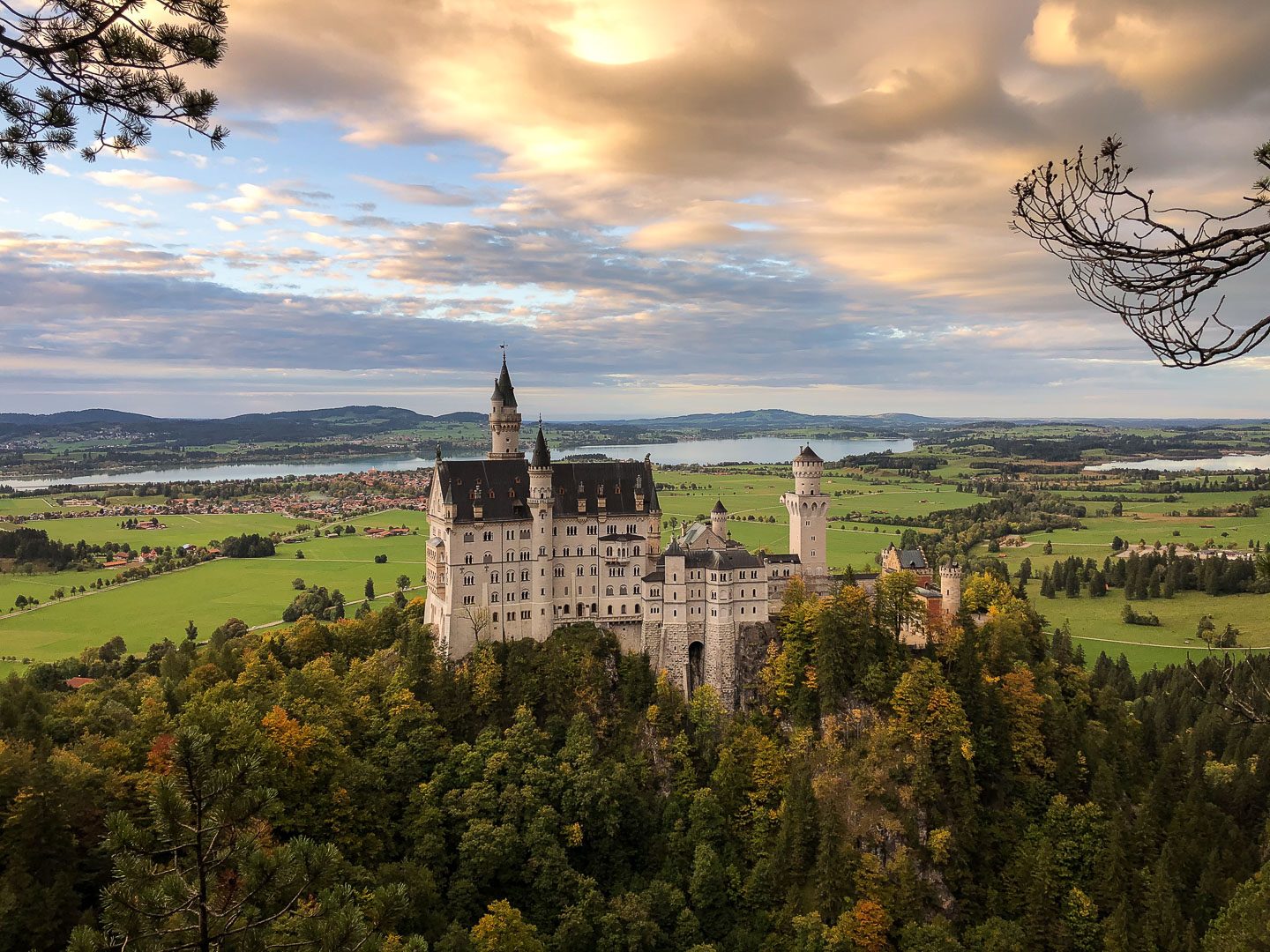 After a quick Google search of the best places around the world to visit in Autumn, I decided on a Bavarian road trip. I was already going to be in Munich for Oktoberfest (read my quick city guide here), so it made even more sense. Flights are relatively cheap from Dublin too and only a couple of hours. The planning and research stage is where I stumbled though, other than a few posts about the Romantic Road, I couldn’t find a lot of decent information. So, if the idea of a Bavarian road trip is up your proverbial alley then read on. 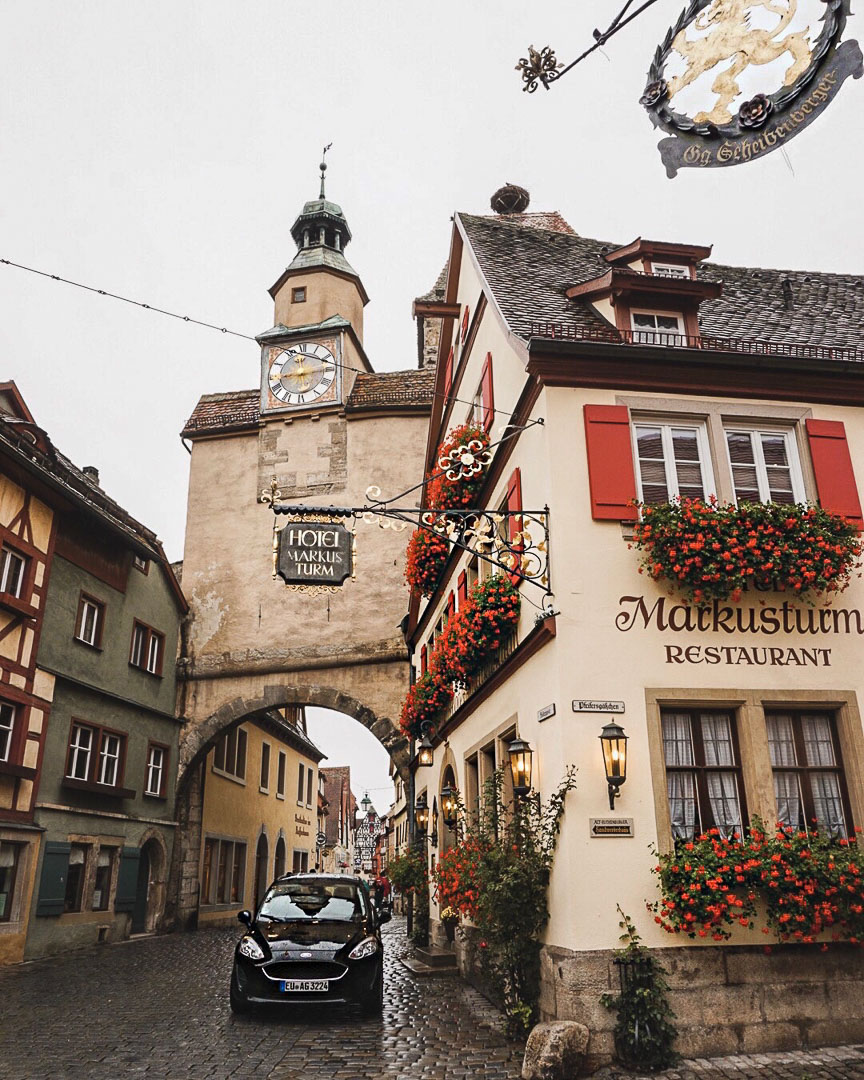 Obviously all road trips require a car, so I browsed Auto Europe for something that would suit. There would only be two of us and not too much luggage and we didn’t have a crazy amount of ground to cover, so something compact would do the job. It made sense to use a car hire broker that compares prices from all the big international rental companies to get the best price and Auto Europe promise to match or beat the price if you find something cheaper elsewhere. I was tempted to go for a faster car to enjoy the parts of the infamous Autobahn which have no speed limit, but responsibly decided this wasn’t necessary. On that note, remember there are in fact speed restrictions on many stretches on the highway, so keep an eye on signs. More info on car hire in Munich here. 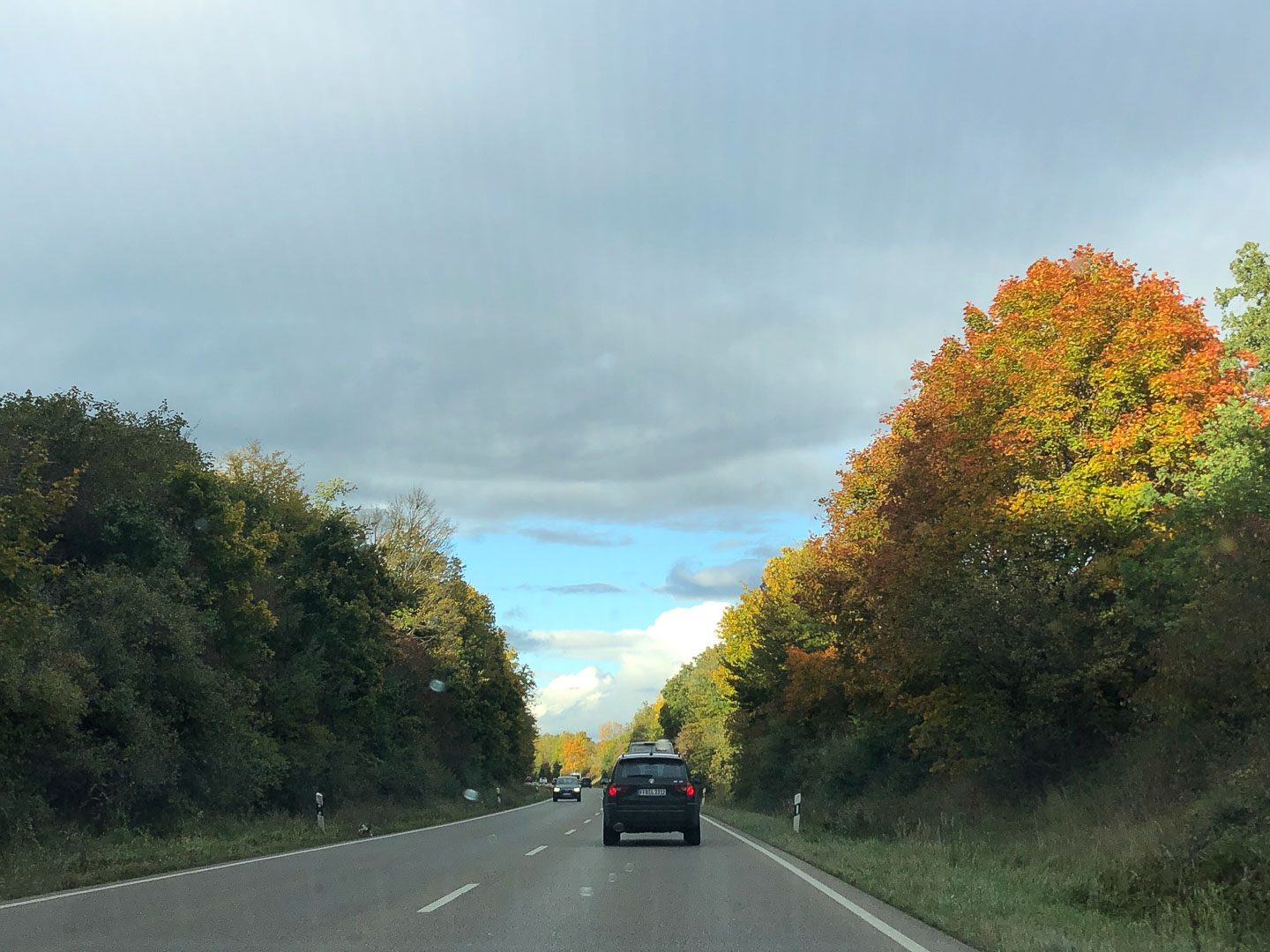 Picking out the highlights I didn’t want to miss on a map, I was able to create a loop back to Munich with 3-4 stops, staying one in night each with leeway for an extra day wherever we fancied it. You could definitely pop over the border into Austria too, just make sure you’ve notified the car rental company first. The main things I wanted to see were the town of Rothenberg ob der Tauber, Füssen where the famous Neuschwanstein Castle lives and Nürnberg (Nuremberg). The longest drive would be three hours, so all relatively easy – you’ll find the stops on this Google map:

Stops on our Bavarian road trip route in order of preference

Ok the first two stops on my list are actually a tie. Rothenberg ob der Tauber is so quintessentially Bavarian and so festive – even in October. We stayed at Villa Mittermeier Hotel, a minute’s walk from the town. Warm, clean, cute and cosy and only €75 on hotels.com. We actually ended up staying a second night in the same spot, we arrived into Rothenberg late and wanted to spend a little more time there, so we didn’t feel rushed. The loop route from Munich gave us the freedom to play around with time a little and it was nice not having to stick to a strict itinerary as nothing was too far apart and we were able to book accommodation daily.

The Medieval Old Town is enclosed by the original walls and gates surrounding cobblestone streets and timbered buildings. Along with a cathedral, church and towers, it is perhaps most famously home to a year-round Christmas museum. You can stroll the covered walkway circling the town for views both inside and out of the walls to get your bearings… 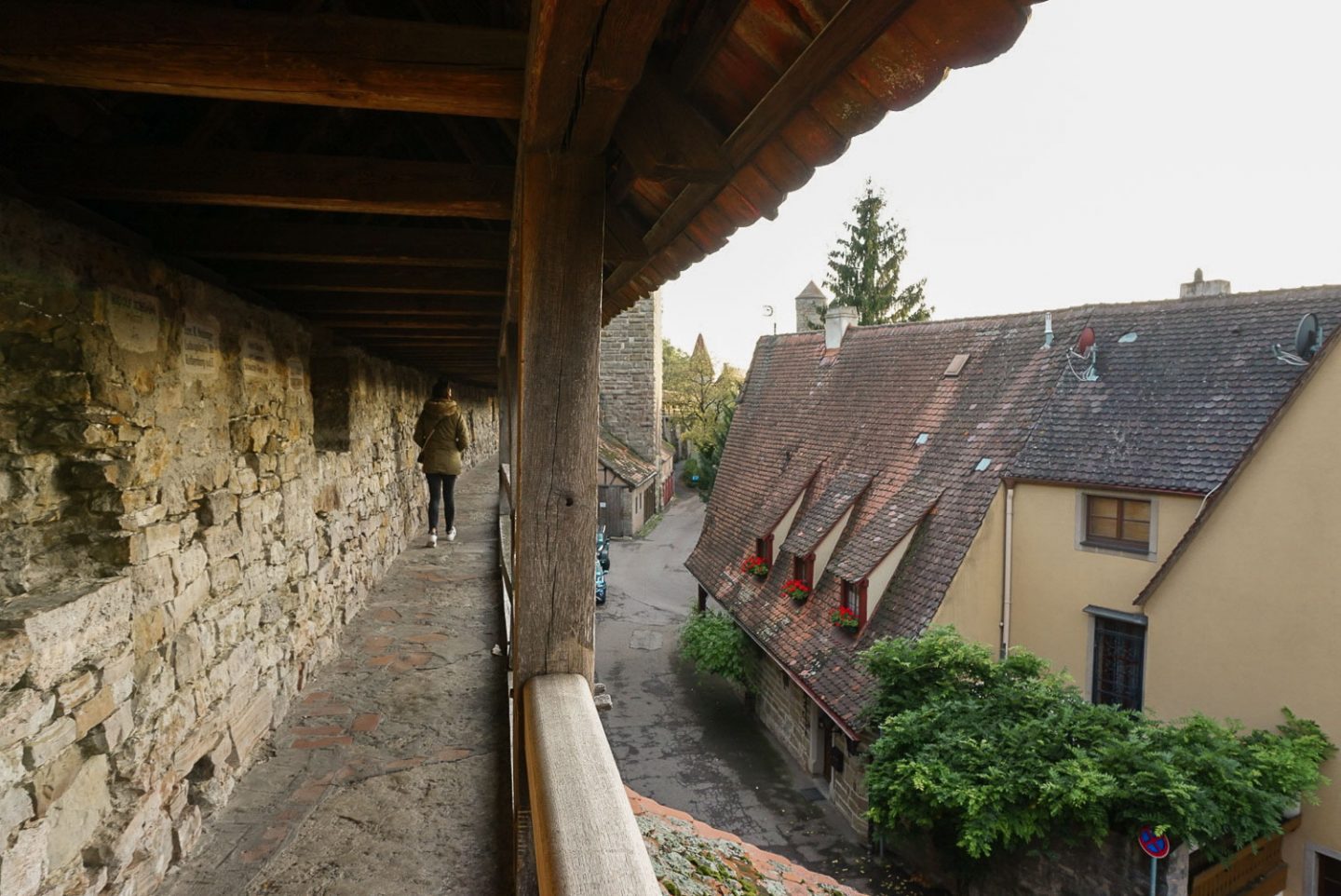 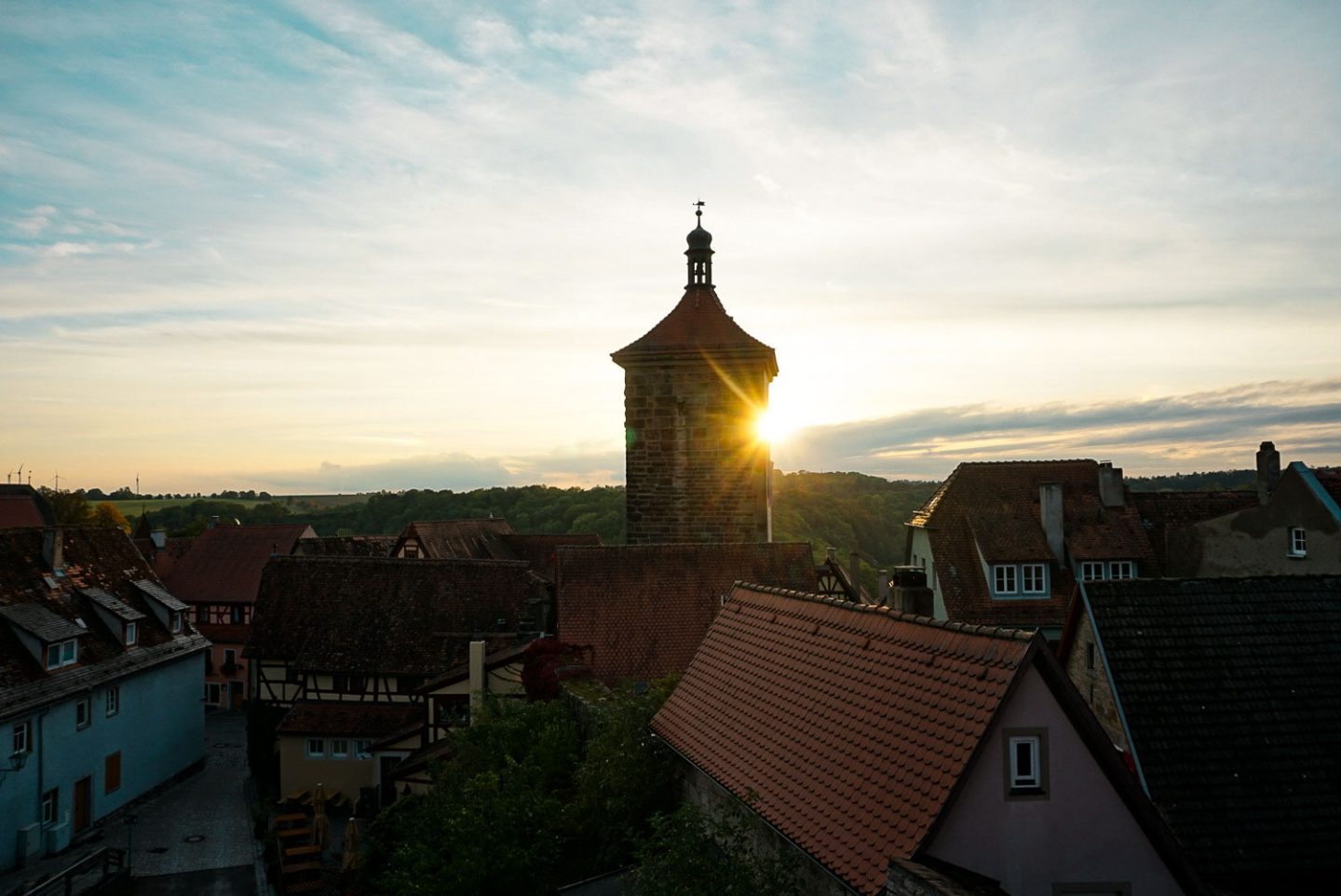 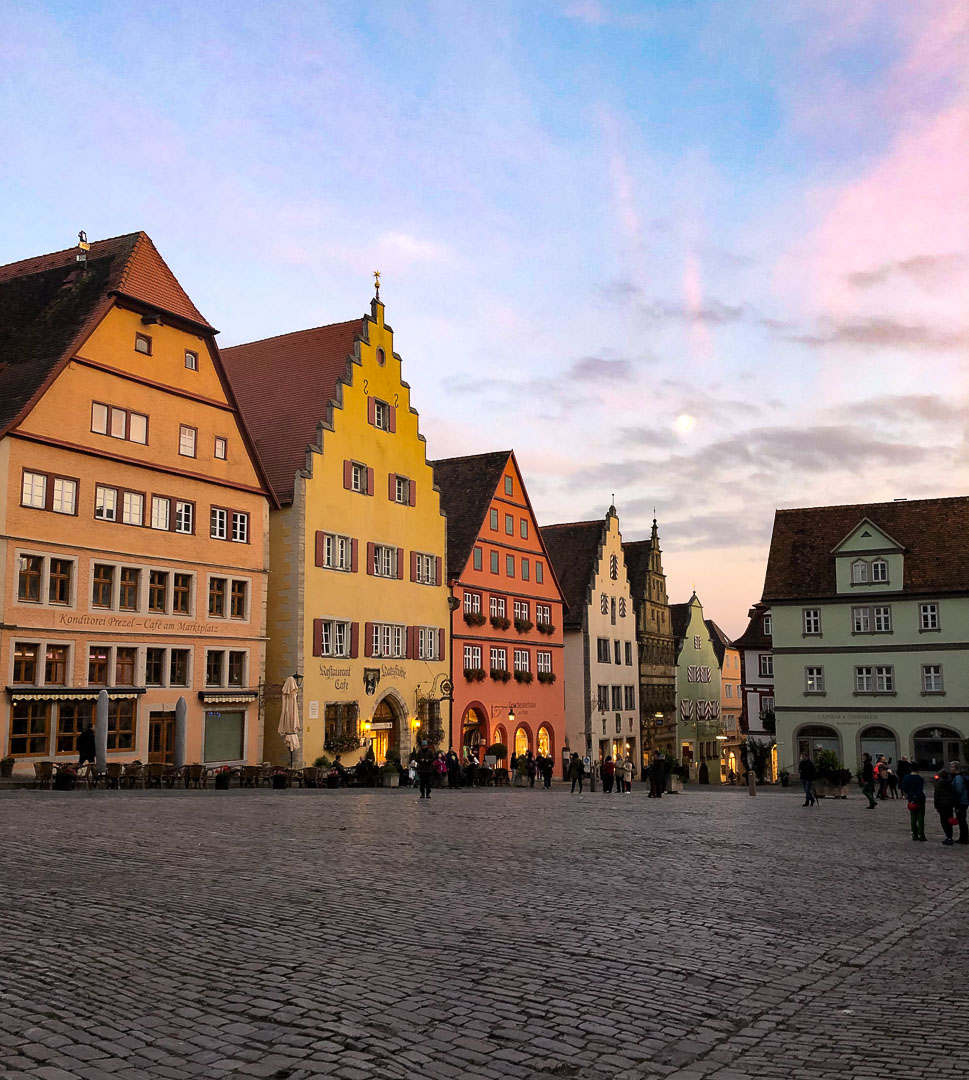 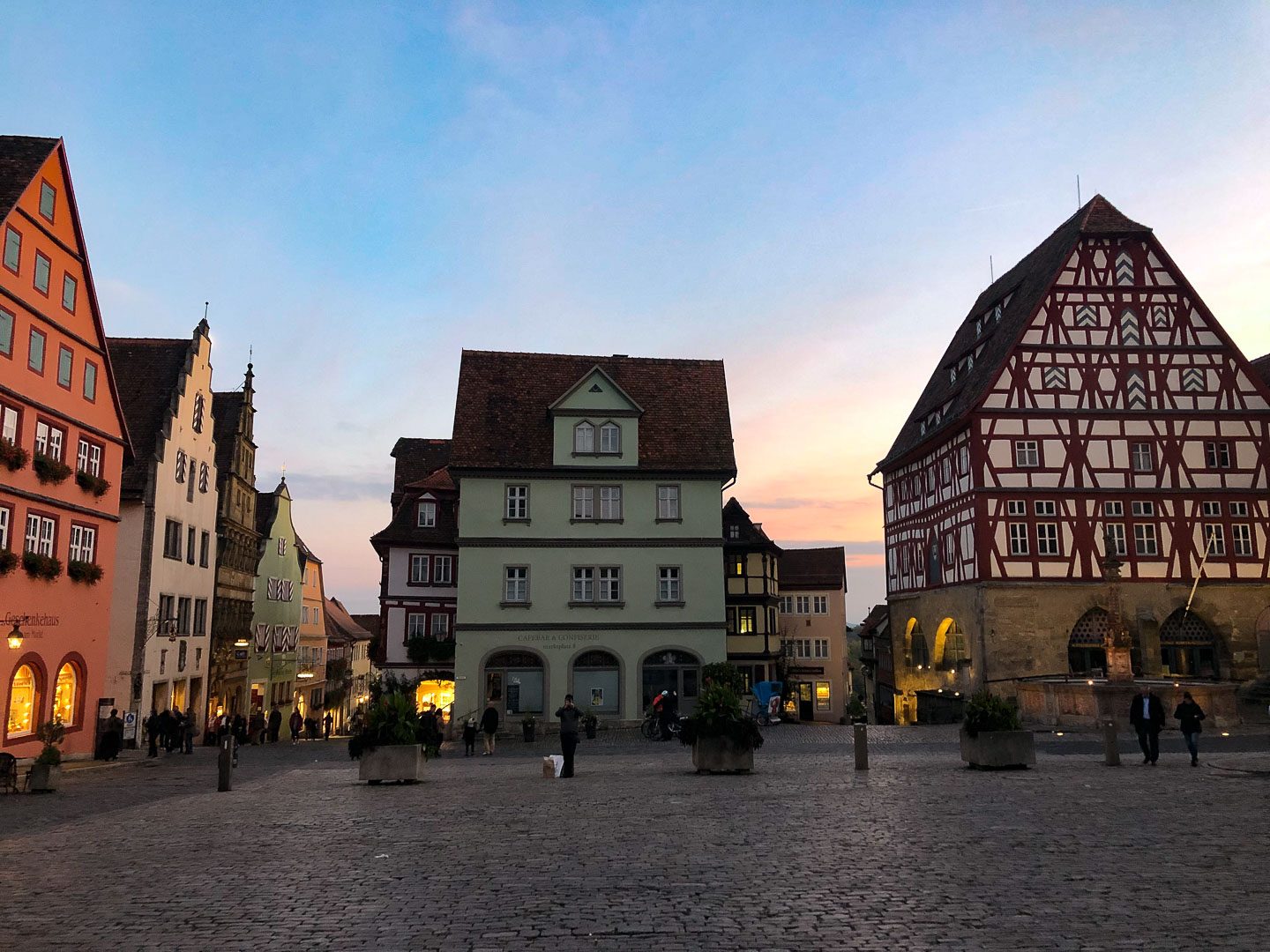 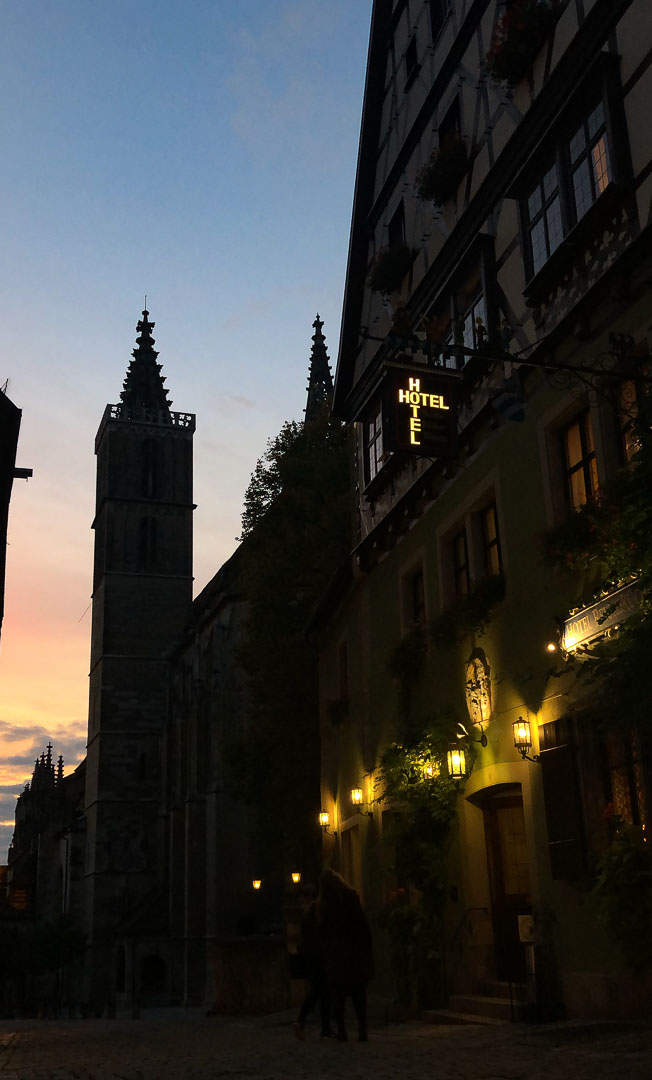 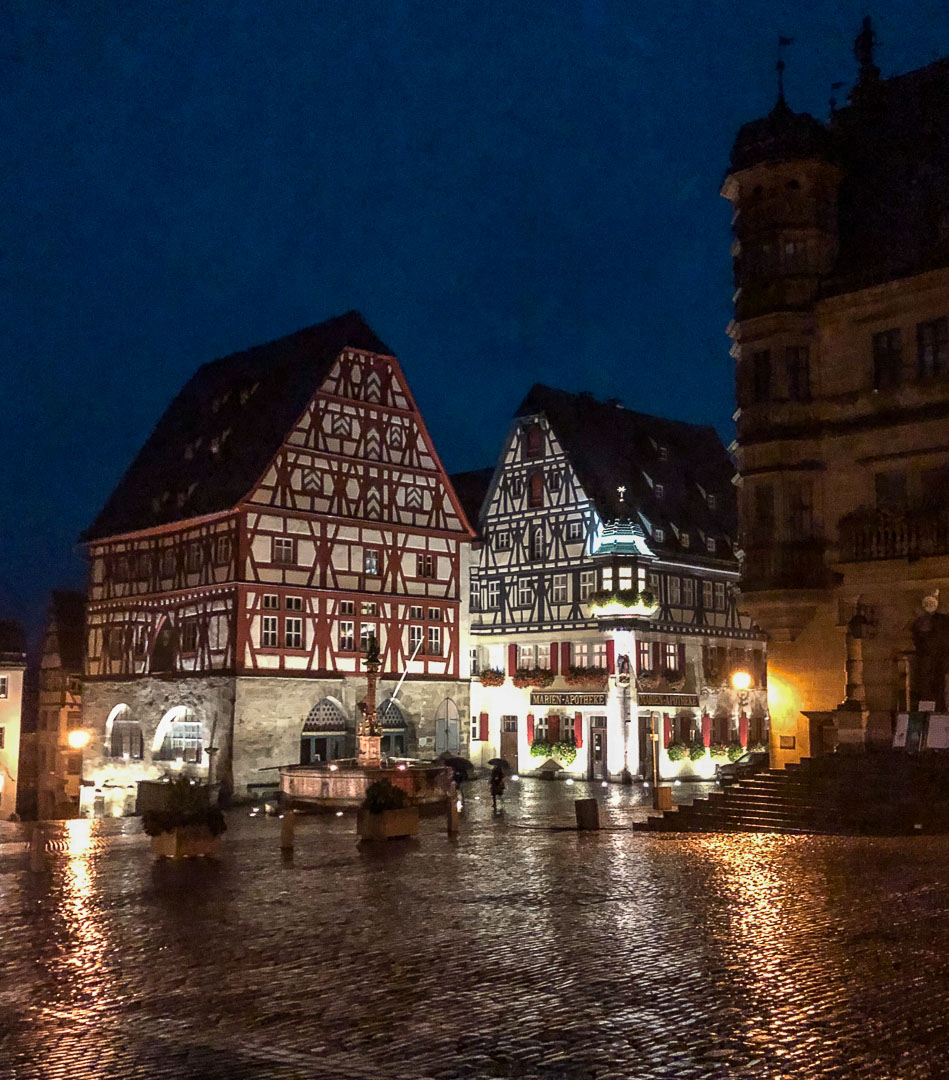 There is one place you’ll always find fairy lights though, in Käthe Wohlfahrt Weihnachtsmuseum. The exterior of this building is misleading, as inside you’ll find a huge treasure trove of every type of Christmas decoration imaginable, from nutrackers to crystal baubles, stained glass ornaments, wooden figurines and everything else in between. 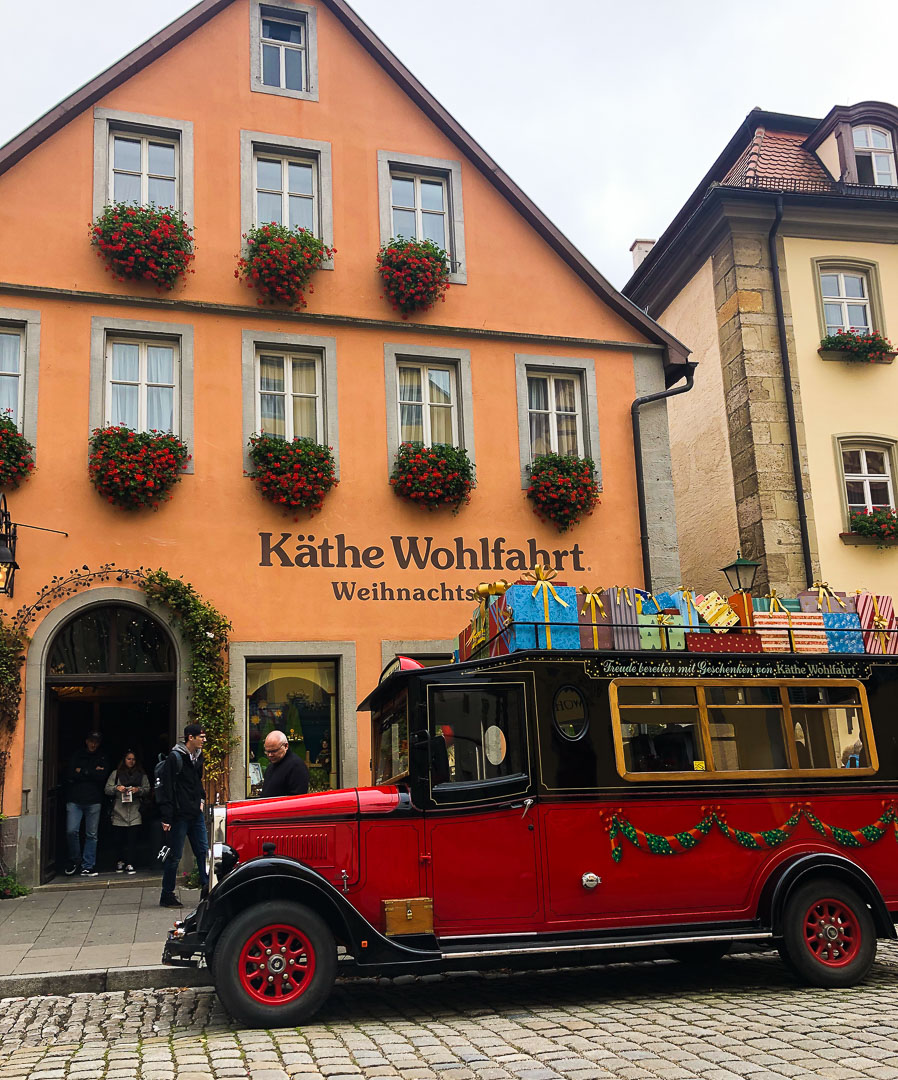 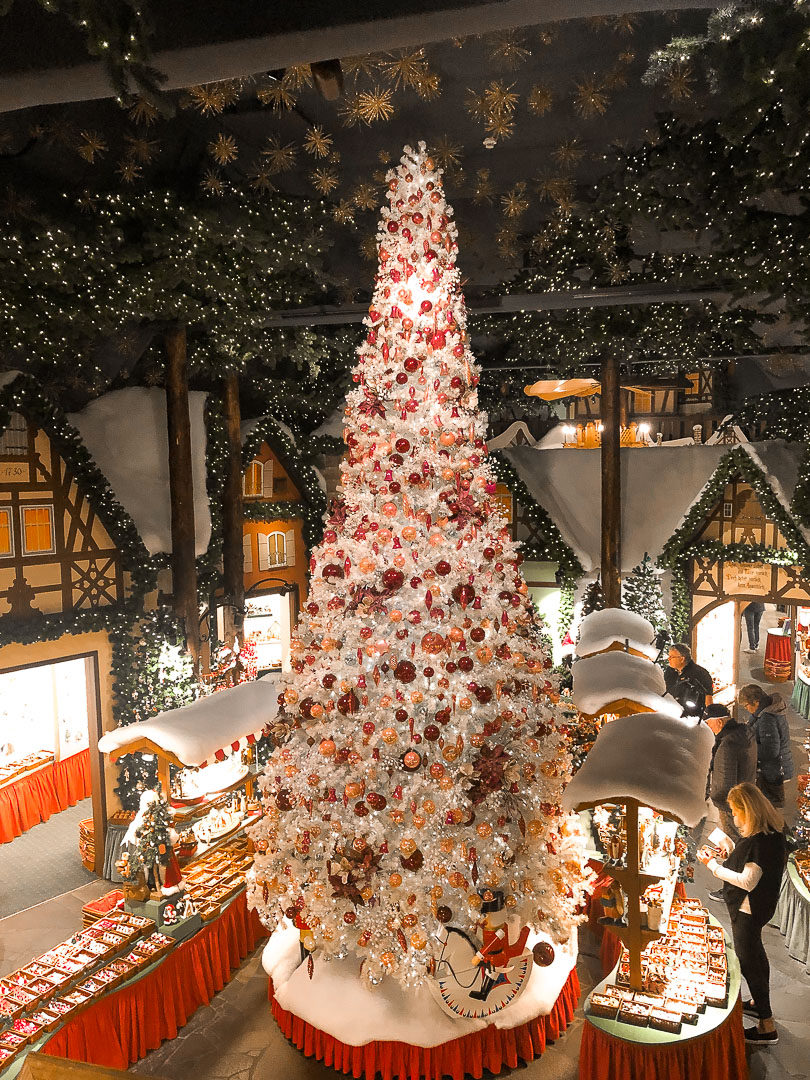 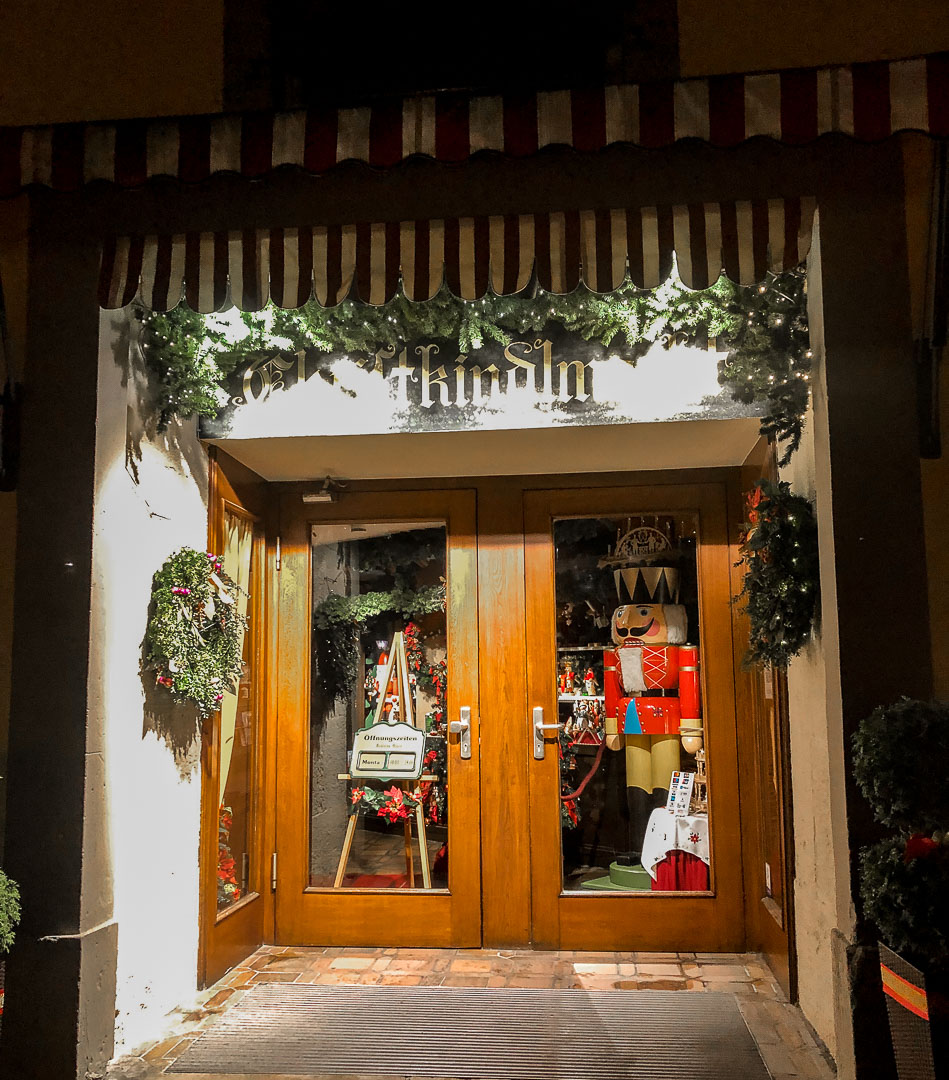 You will of course need to snack on simple bratwurst sandwiches when hunger strikes, you can pick them up all over town for a couple of Euro. And if you’re getting tired of Bavarian food, there’s a lovely little Italian called Pizzeria-Eiscafe Roma serving up all the classics including really reasonably priced Prosecco and carafes of wine plus delicious bruschetta and pasta. Perfect when in need of a break from the hearty, meat-heavy German dishes. There isn’t much in the way of nightlife in RobT, in fact we couldn’t really find a bar that wasn’t also a restaurant and after eating, the smell of fermented cabbage can get a bit much! Take it as an opportunity to have an early night before getting on the road the next day. 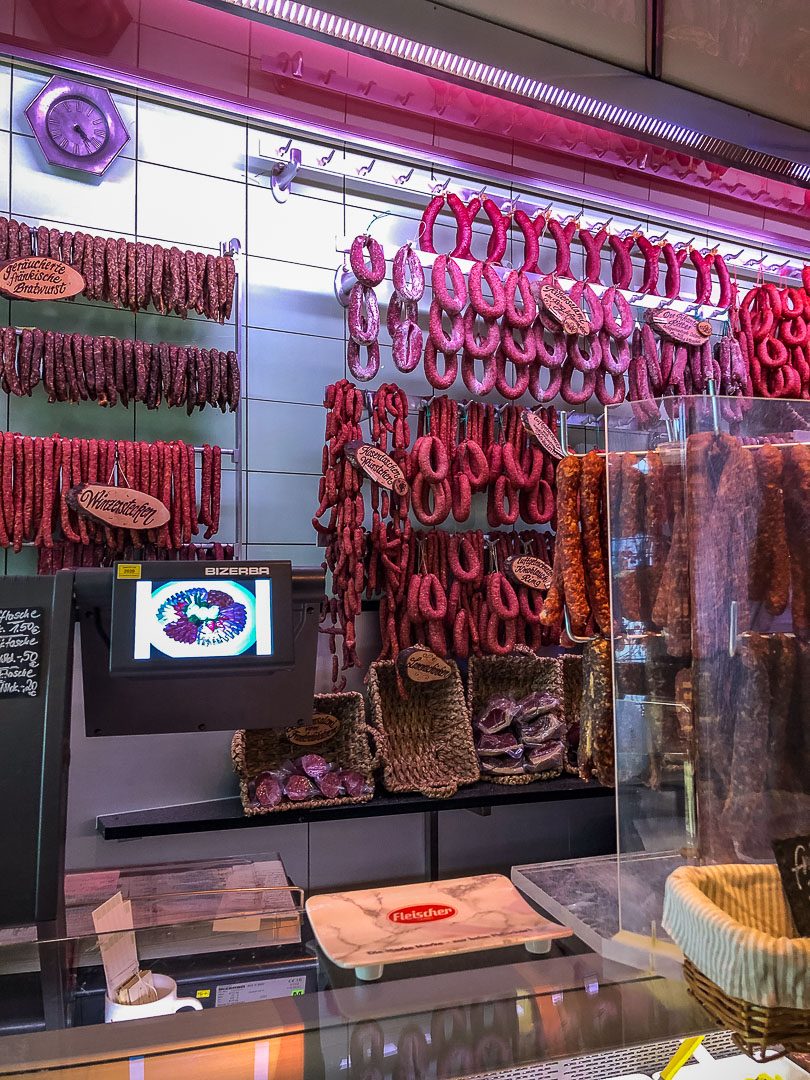 You can’t visit RobT without having your own Kodak moment at the infamous photo spot – Das Planein. Be prepared to queue at busy times though, Rothernberg is extremely popular with tourists and this is the single most photographed location in town. 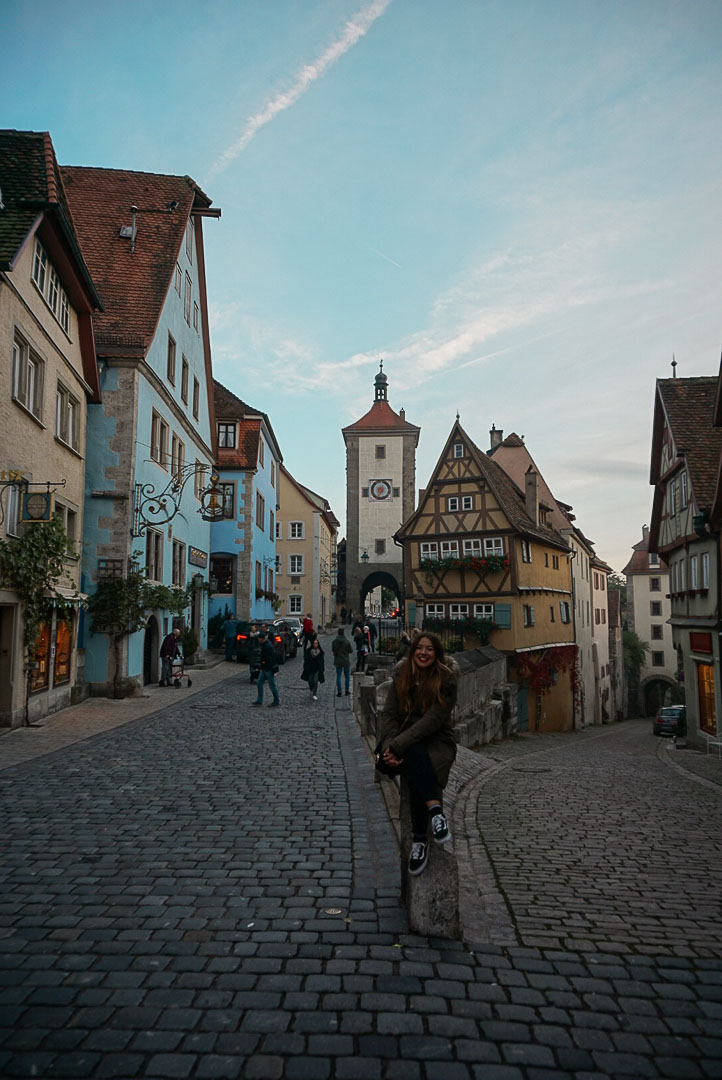 On to the Alpine town of Füssen, just north of the Austrian border and home to the castle which is said to have inspired Walt Disney himself, Neuschwanstein. The town centre comprises of a few pedestrian streets lined with cafés, restaurants and lots of shops. We stayed slap bang in the middle in a very average (and cheap – around €60!) hotel aptly named Restaurant and Hotel Ludwigs after the King of Bavaria who commissioned the castles. It did the trick, but you wouldn’t want to stay there much longer than one night. 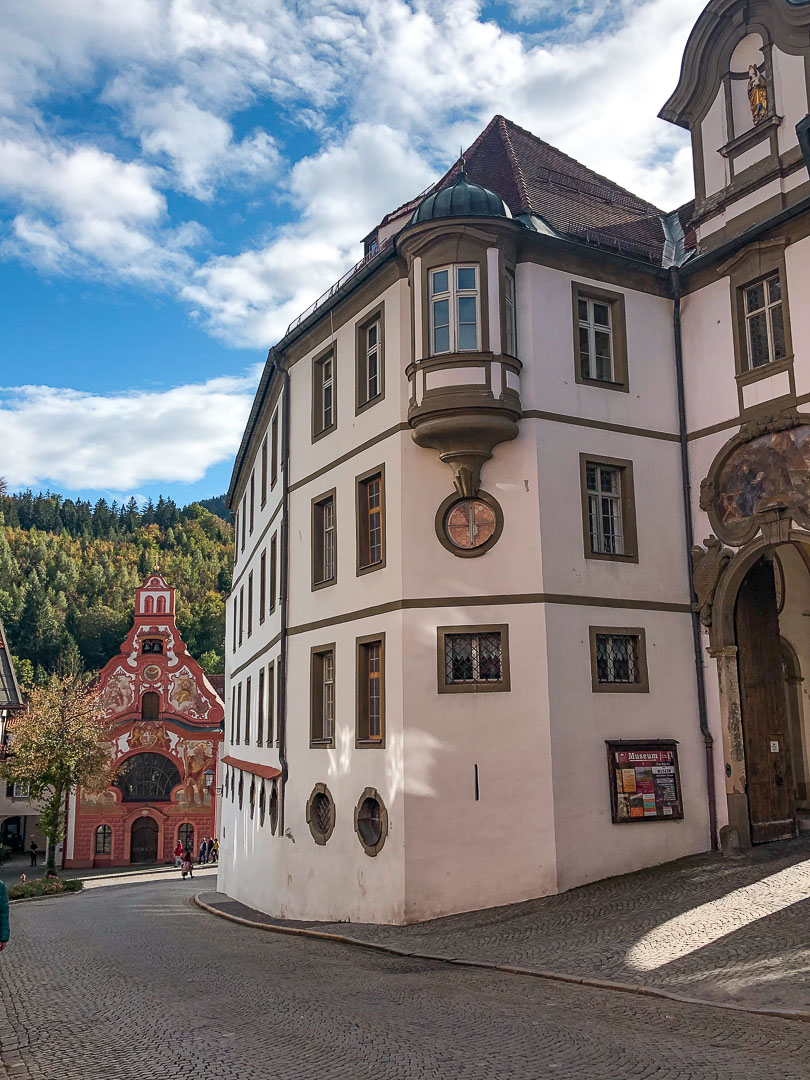 After checking the weather forecast for the following day (rain!) and reading reports of how busy the queues are at Neuschwanstein Castle even before it opens in the morning, we decided to to make hay while the sun was still shining and head up before sunset. If all else failed we could go again in the morning (it’s only a ten minute drive from town), but if we waited we could end up being disappointed. The first glimpse from the base of the surrounding mountains was magical… 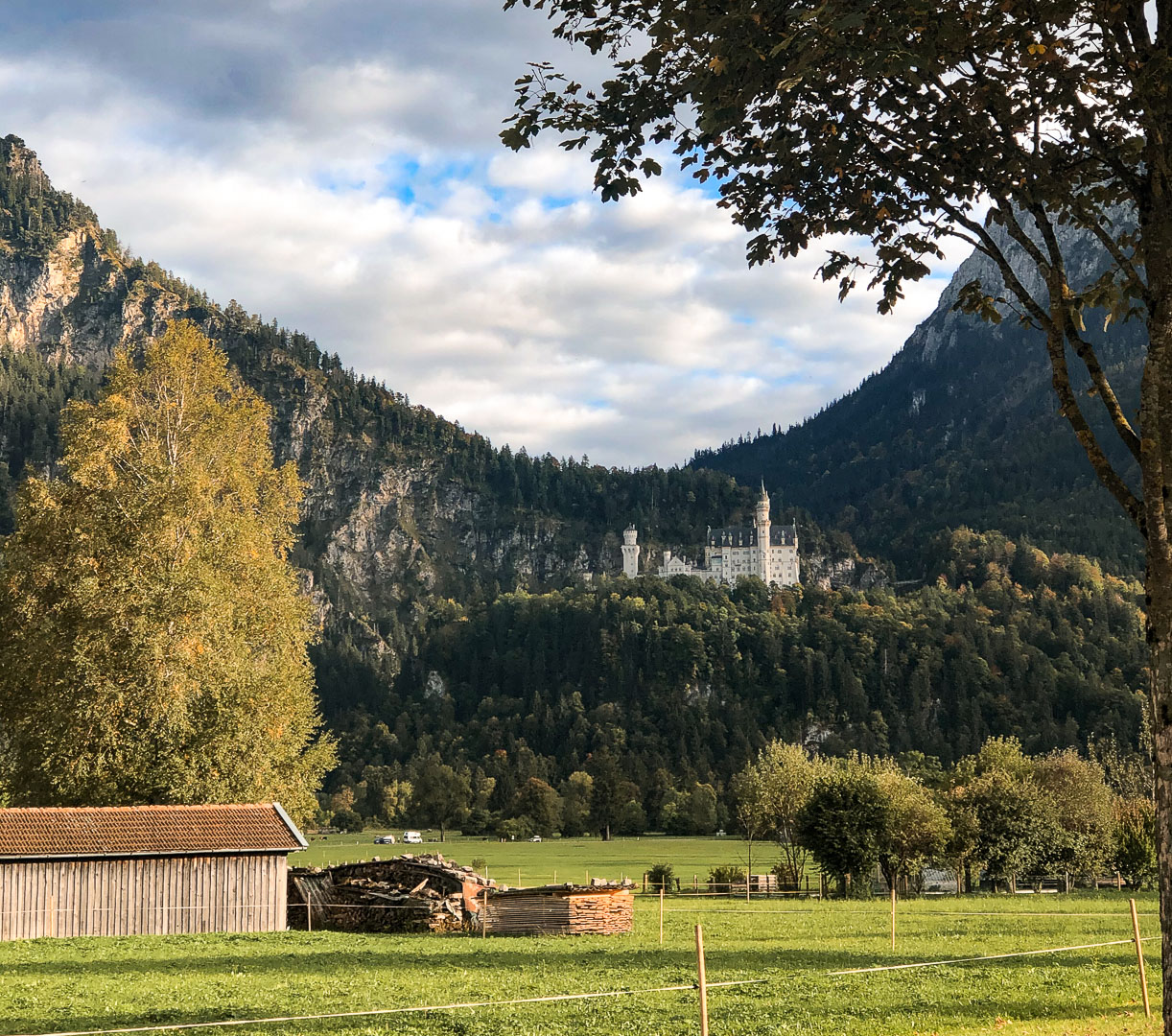 We opted to skip the guided tour of the inside of the castle and forego the massive queue of people waiting to take a bus up from the car park to walk the 35-45 minute uphill hike to the famous bridge. Marienbrucke, the pedestrian bridge built in 1845 to look back on Neuschwanstein Castle, hangs over a gorge between the cliff and to be honest really isn’t for the faint hearted. But if you want to get the shot, then this is the spot. The view of the exterior of the castle and the vantage point from up in the mountains is what we were after, neither of us had any real interest in seeing the rooms or any of the interiors, so I had no regrets with our decision. Just look! 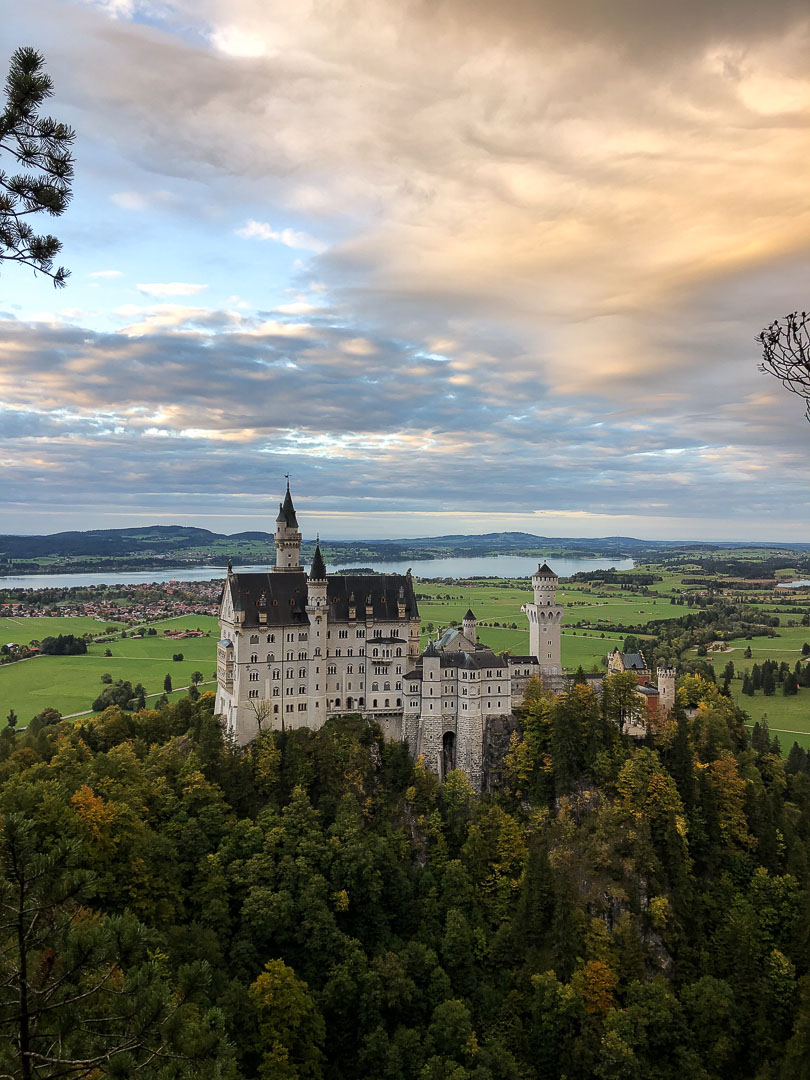 Close to the bridge, but looking in the other direction, you’ll be treated to views of the surrounding mountains and lakes plus Hohenschwangau Castle, the summer residence of King Ludwig II (he didn’t live to see completion of Neuschwanstein). That’s the yellow building middle right in this photo – and I’ve heard the castle tours there are excellent with the added bonus of having much less wait time. 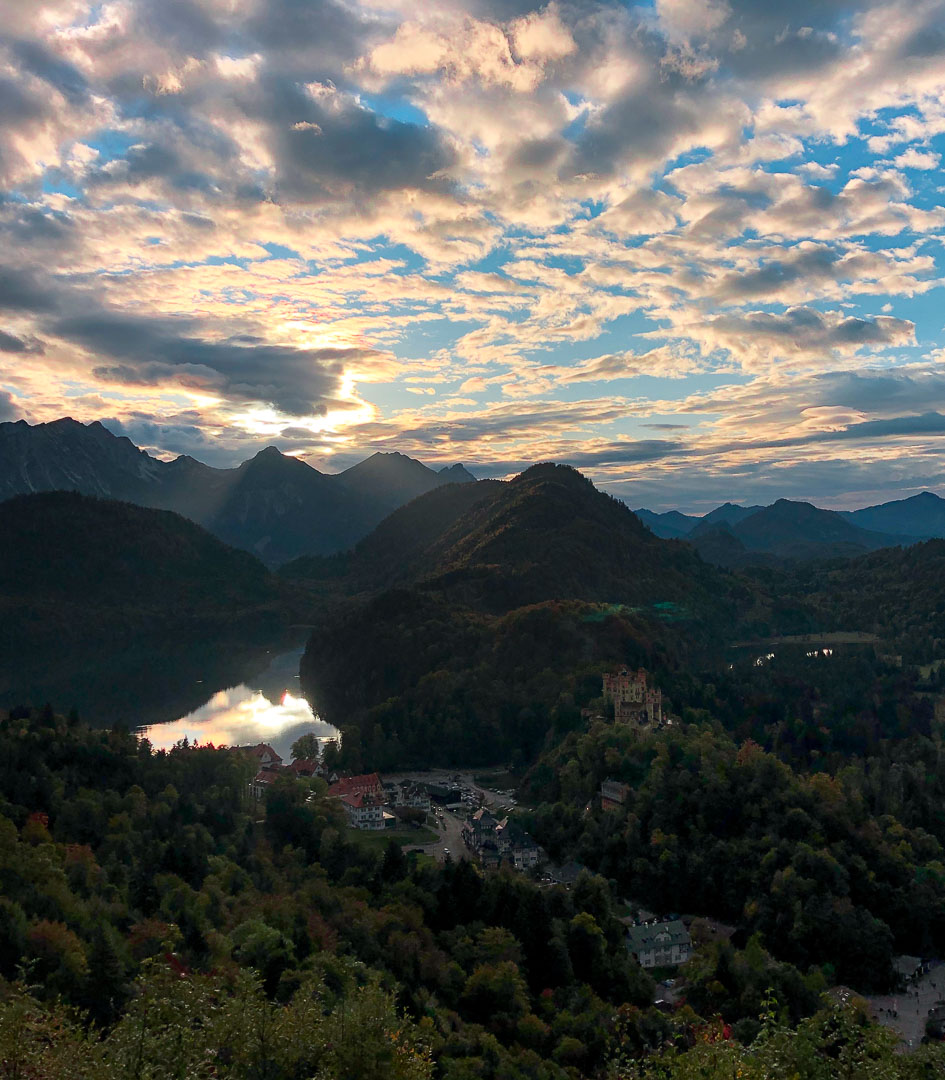 There’s no need to buy a ticket or pay any kind of entrance fee for these views of Neuschwanstein Castle, but you will have to pay for parking down at the bottom. If you continue on past the bridge another ten minutes hike up (but off the path, so it can be slippy – proceed at your own risk!) you’ll get the best view in the house with few to no other people around. 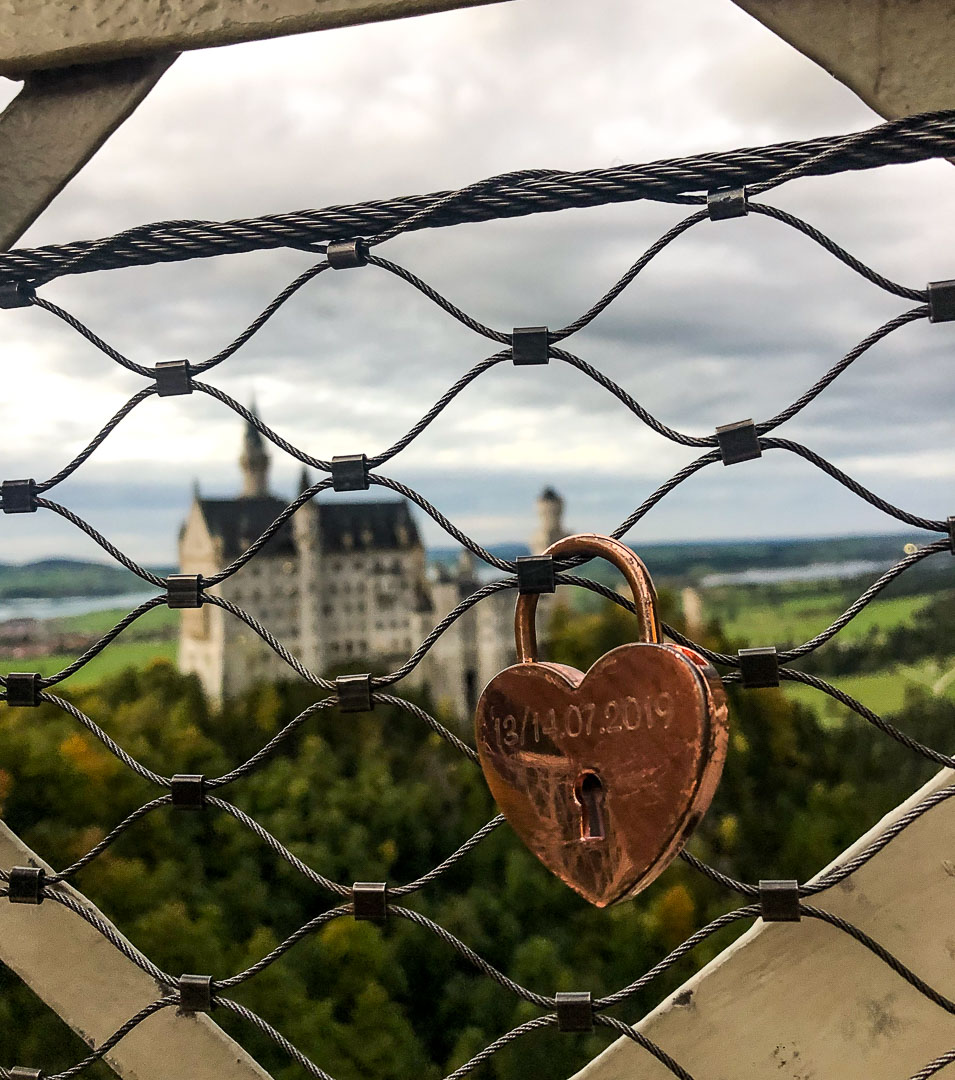 I found this apart-hotel via Hotels.com, which is where I do most of my hotel searches. If you sign up to their reward scheme you get a night free after booking ten nights to the value of the average of your previous stays. I usually just use it for short stays, but if you booked your main holiday that way you’d earn a free night pretty quickly. The Adina Apartment Hotel in Nuremberg cost €116 for an apartment for one night, the room was massive with a gorgeous big bathroom and a kitchenette complete with washing machine. There’s also an indoor pool and sauna in the building, plus the location is really handy. Parking was extra though which was my only gripe. 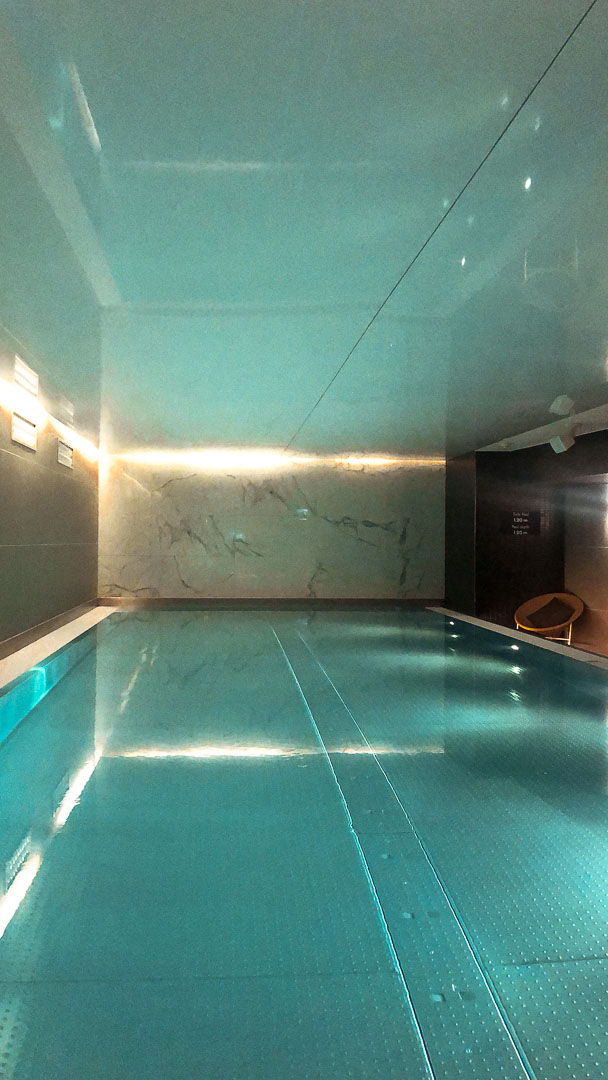 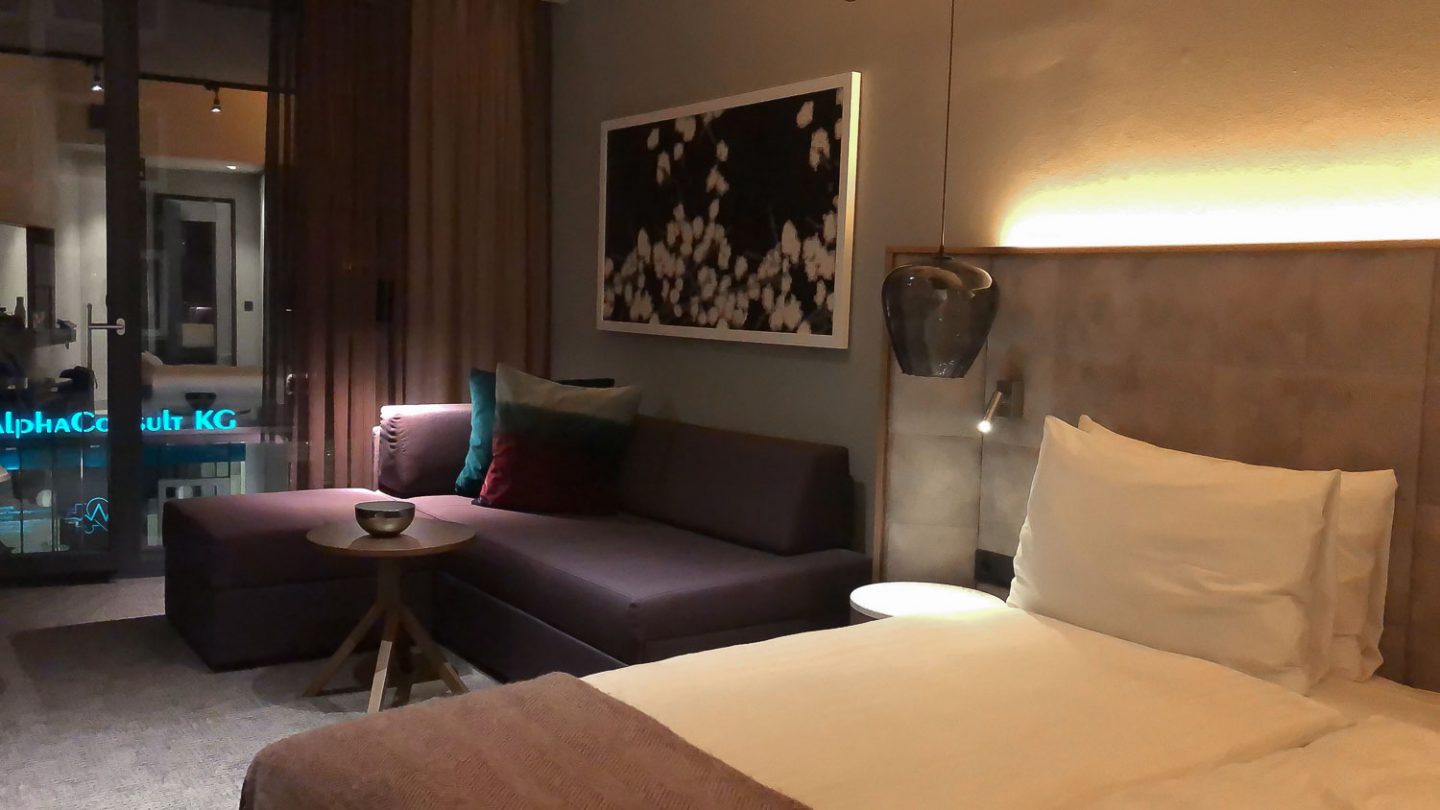 There are plenty of traditional Bavarian pubs in Nuremberg, all serving food too. Bratwurst and (cold) potato salad and small beers which attracted strange looks – no one really orders anything less than a stein. 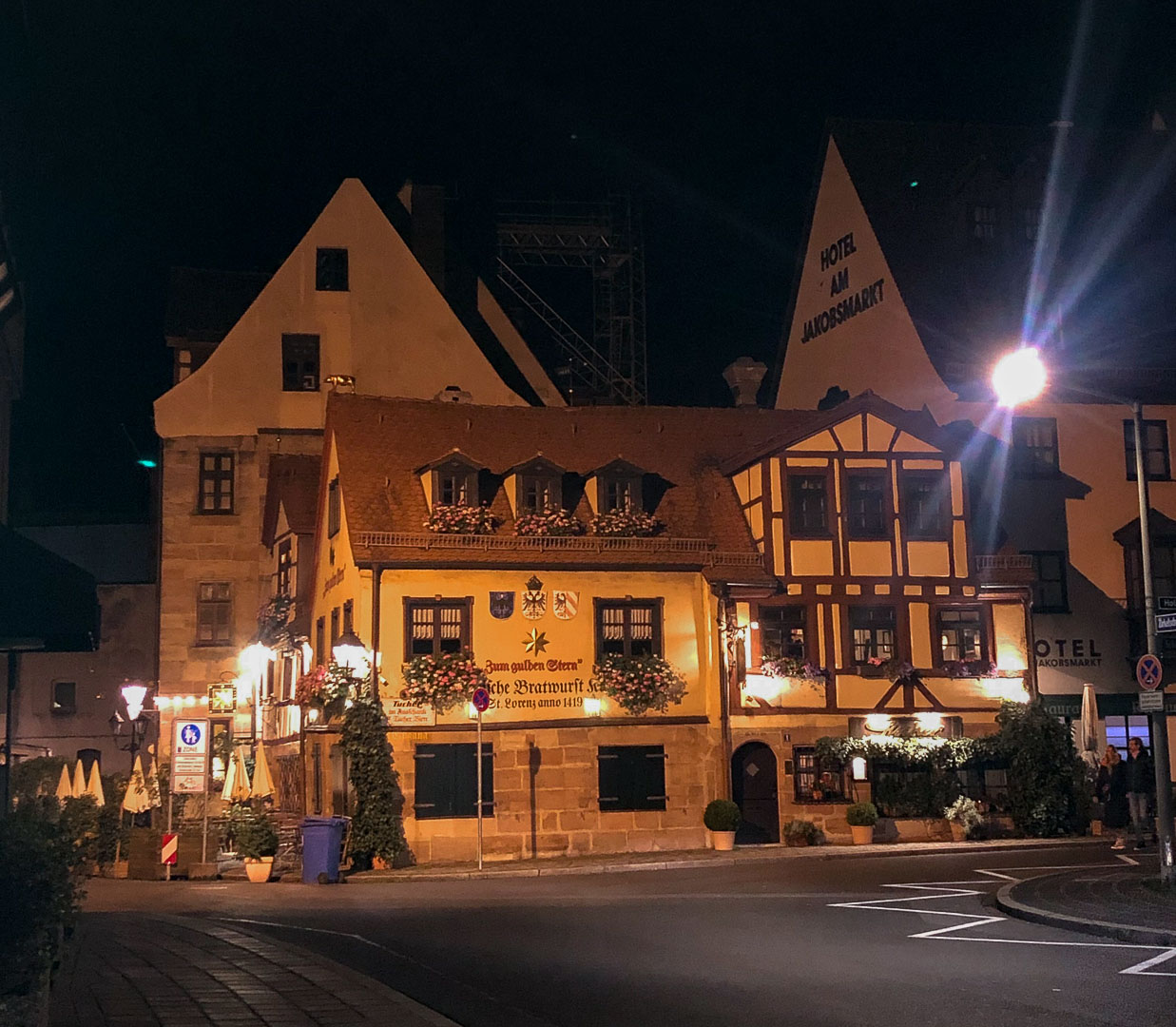 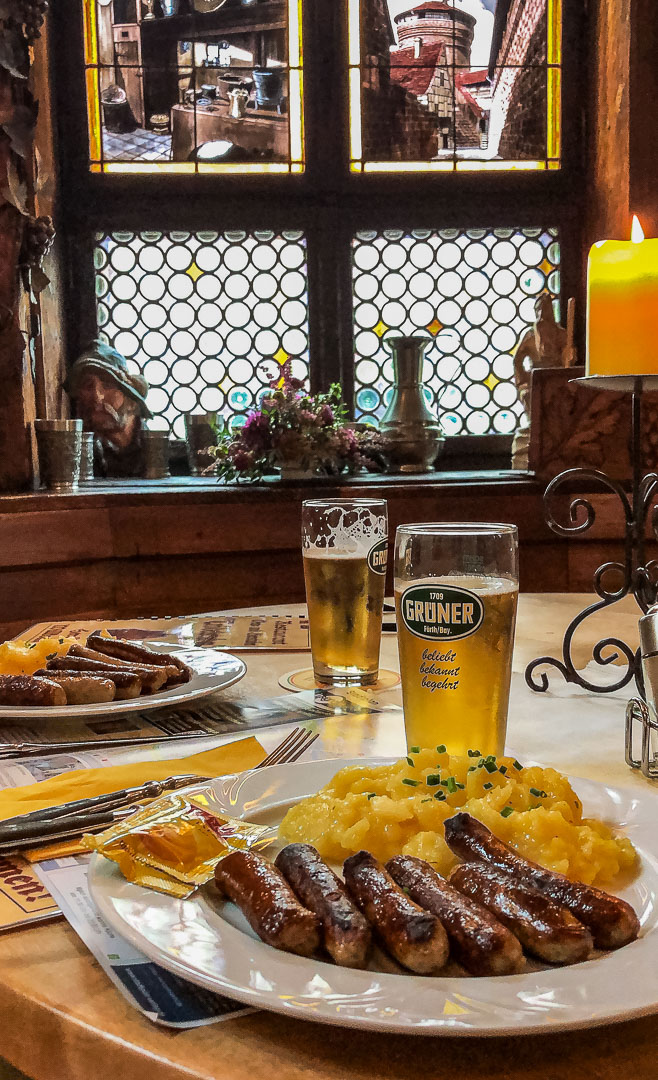 There’s good shopping in Nuremberg, both familiar high street stores and smaller Bavarian boutiques. The streets are pretty as a picture and you can cross over the river beyond the small island and walk straight up to the castle for views of the town. 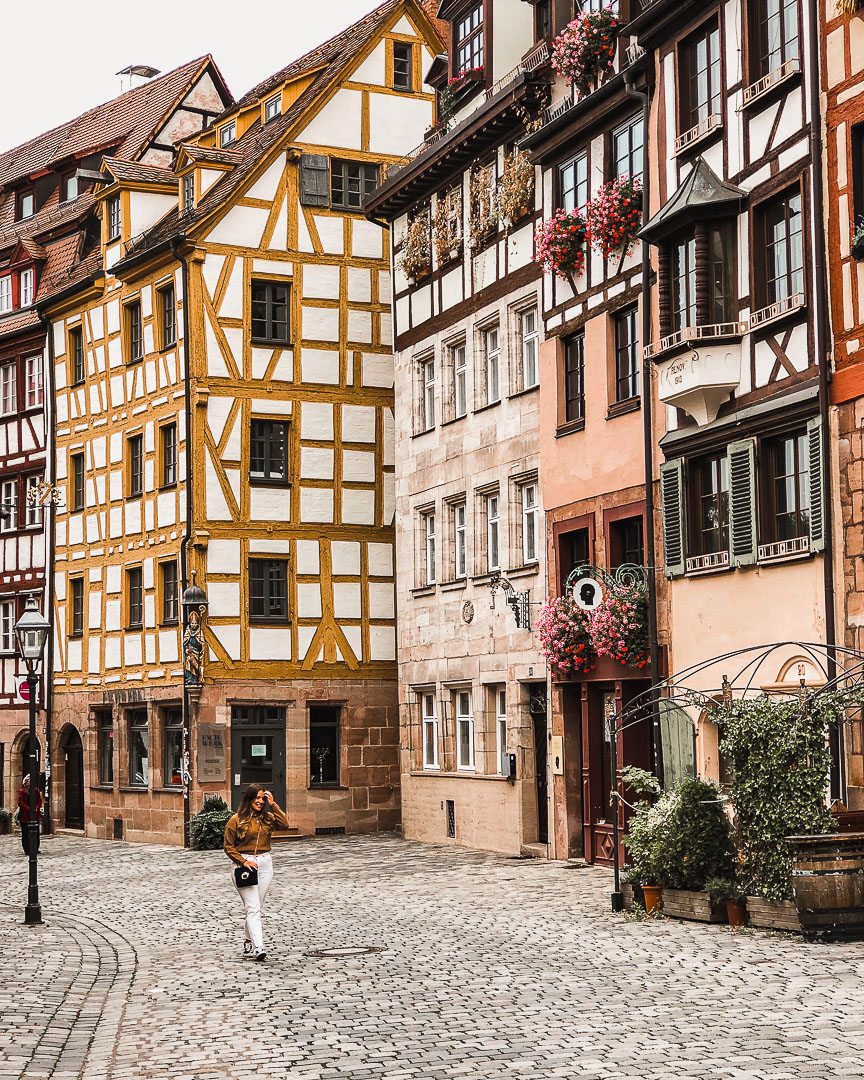 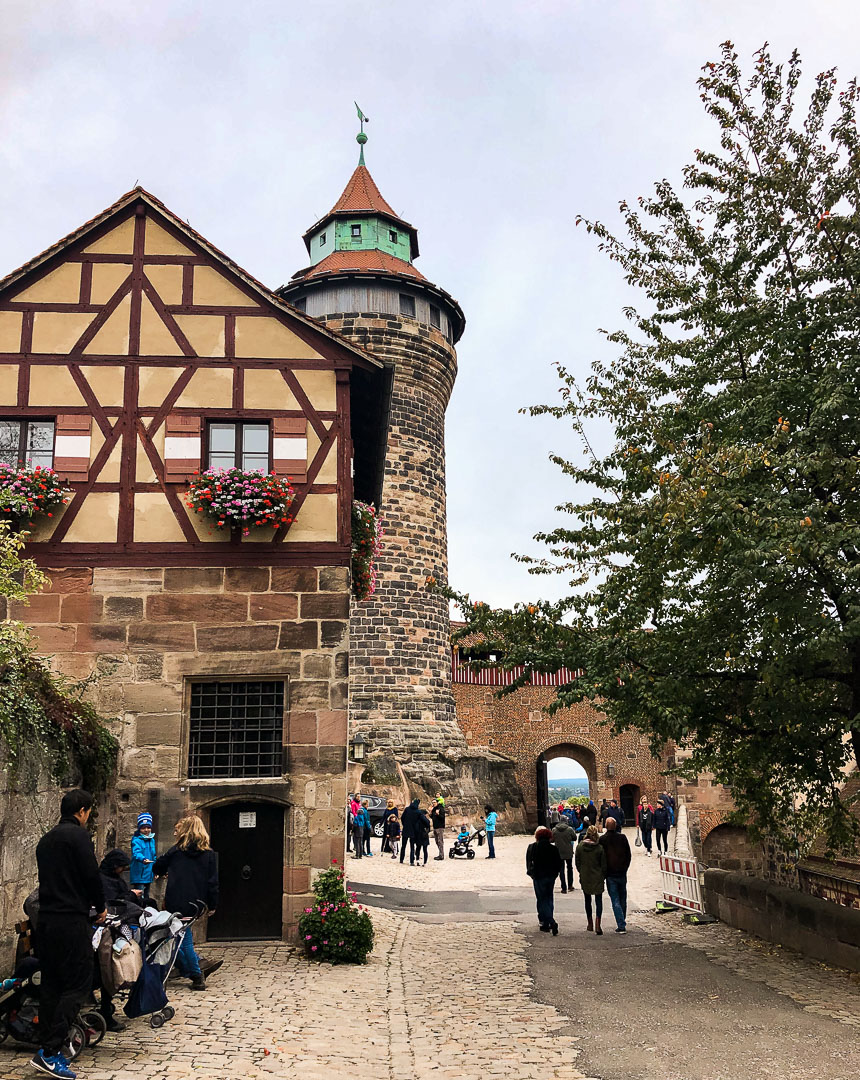 I recommend finishing off your Bavarian road trip with a visit to a German spa hotel which you’ll find dotted all around the countryside, this one wasn’t far from Füssen. I just used the search facilities on hotels.com to find something with an outdoor pool and spa. Das Weitblick Allgäu was €158 for the night between the two of us and was the only hotel to include breakfast. The heated outdoor pool is gorgeous year round (it was nippy when we stayed!) and the traditional German sauna, steam room and sweat cabins are the real deal. Meaning no swimwear allowed! We learned that the hard way, you can keep a towel on though – just don’t walk in in a bikini. Recover from your experience with a cocktail at the rooftop bar, the perfect way to finish off your trip before returning to Munich! 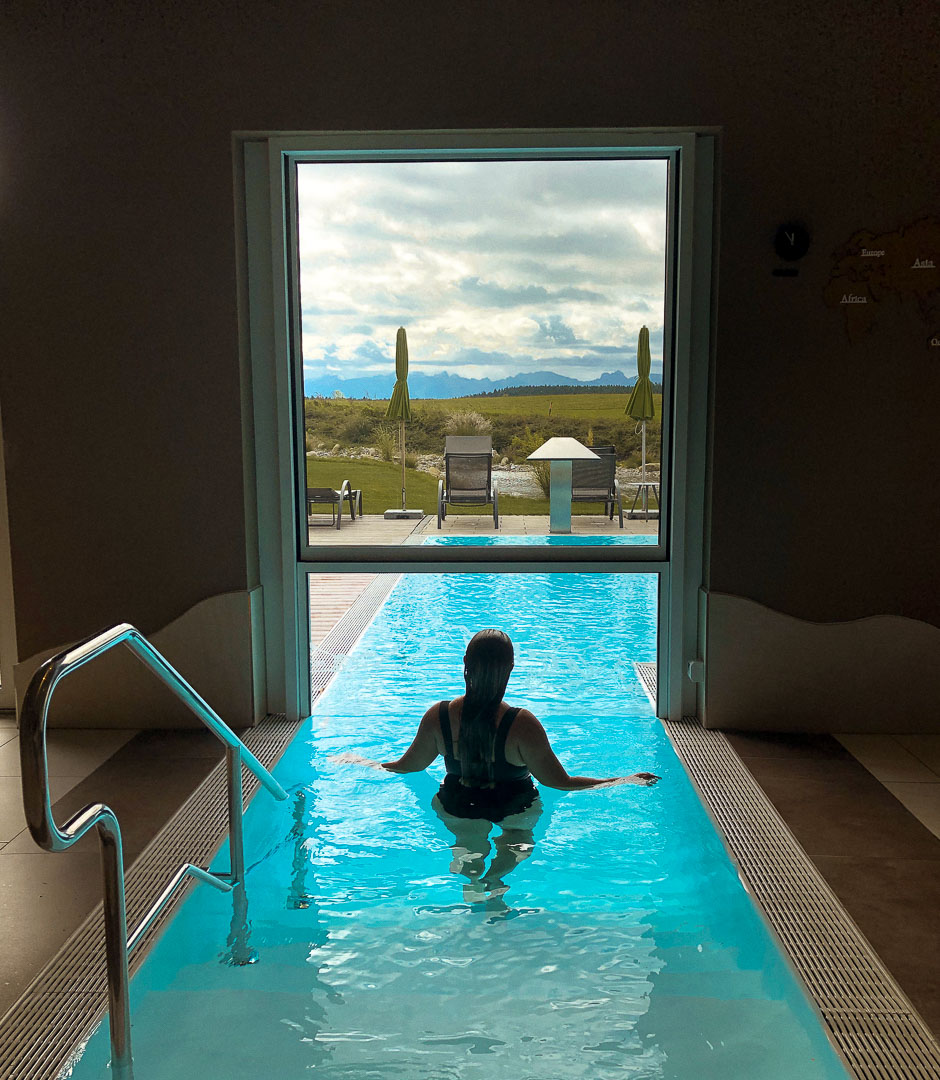 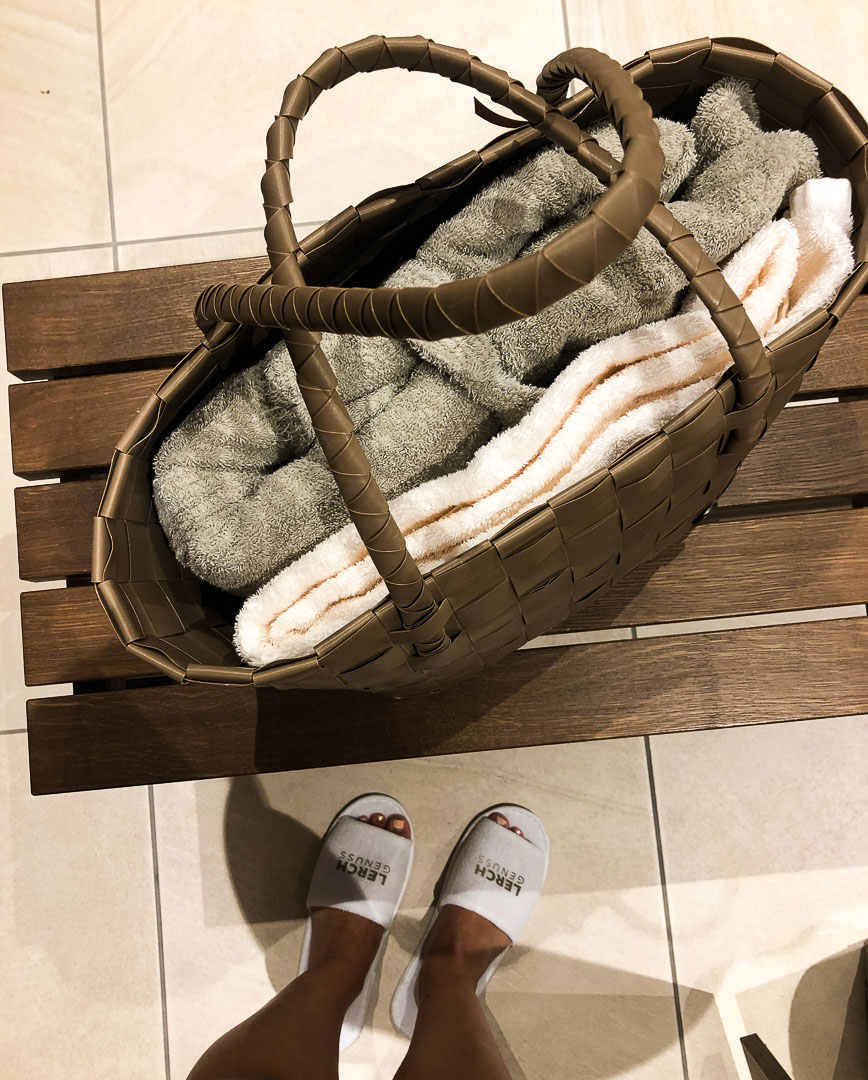