These trips are getting shorter. Just one night in Amsterdam, surely not enough to even scratch the surface? Happy to confirm my fears were unjust. While I would always like an extra night (even at the end of some of my month long trips), my sojourn in Amsterdam felt entirely adequate. 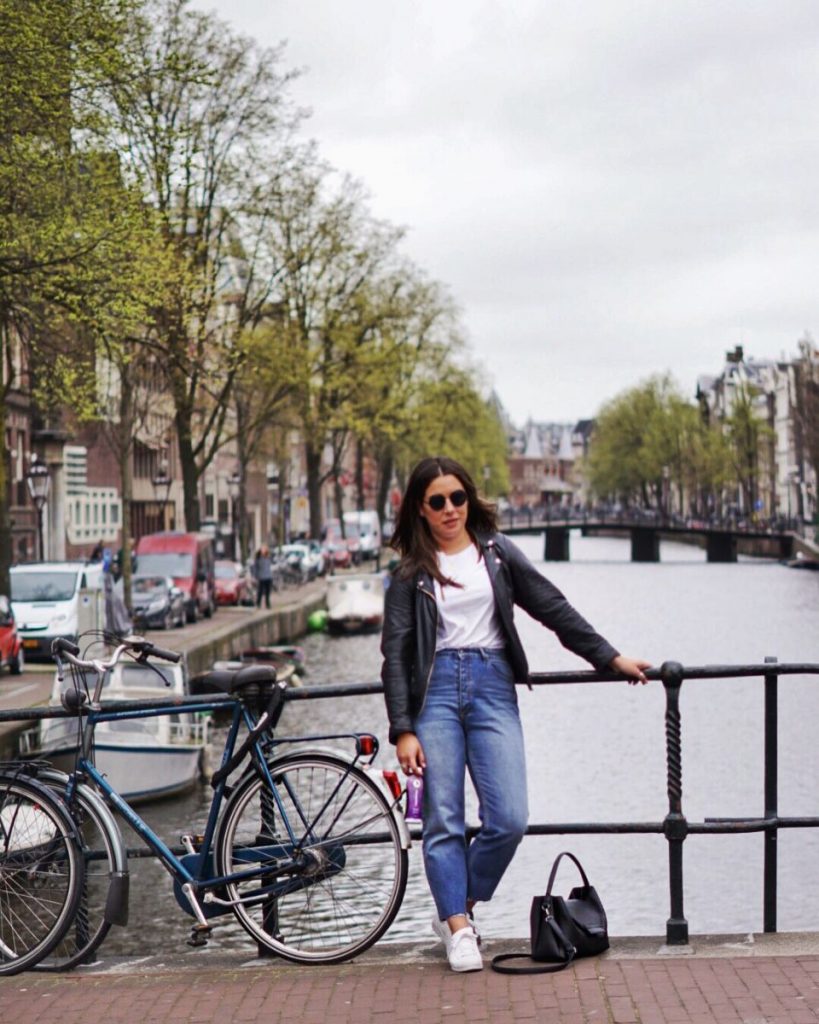 For starters, KLM now fly four times daily from Dublin to Schipol and the journey takes less than an hour and a half. Perfect for a quick city break, but also incredibly handy for transferring to one of their long-haul destinations (think Cartegena, Curacao or Cape Town!) or any flight connections. Schipol’s new transit and security measures make it one of the most efficient airports to transfer to another flight, in fact 8 out of 10 of the passengers travelling through the airport are on their way to another destination and you can do it in as little as 50 minutes. 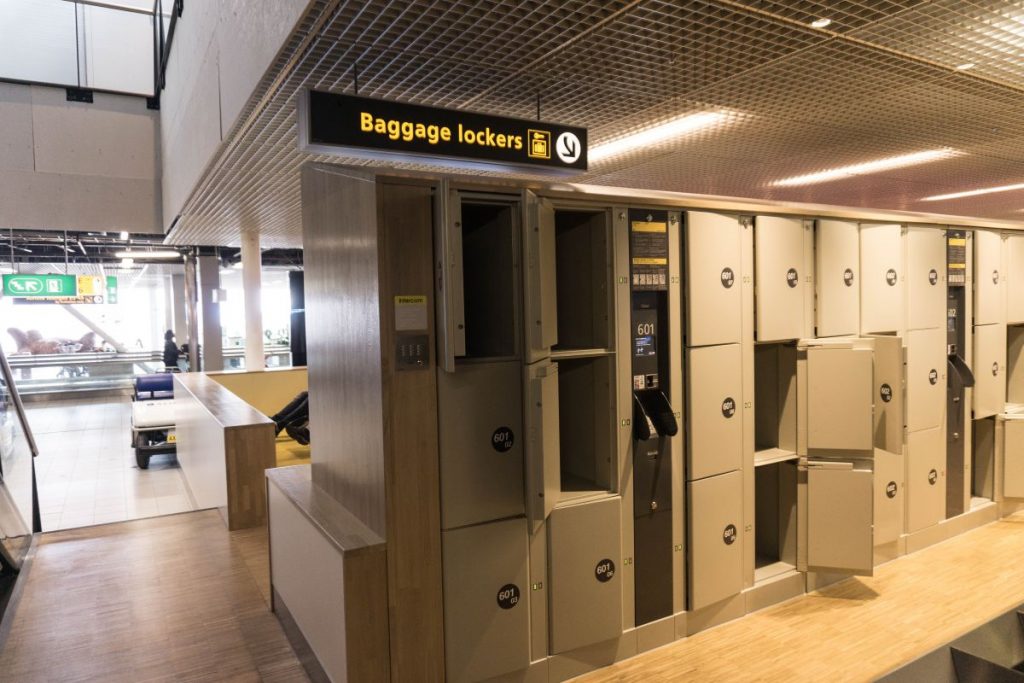 That doesn’t mean you can’t enjoy some of what Amsterdam has to offer though, even transit passengers can use the baggage lockers in the airport and head out to explore. Something I didn’t realise was even possible, I’ve always thought you could only do that if you were travelling on two separate tickets. So you could, for example, book Dublin to Bangkok and give yourself some extra time in Amsterdam without any extra cost by choosing your flight times wisely. The train station is actually inside the airport and there’s only one terminal so getting around is easy peasy. Or on the flip side, time it so that you have the shortest layover possible. It’s a win win.

We stopped for lunch at the Bowery in the Sheraton Hotel just in front of Schipol, where I tried ‘lamb ham’ for the first time. “Is that lamb or is that pork”, I asked the lovely waitress. She replied, “it’s ham of lamb”. I ordered it anyway, it tasted exactly like really thinly sliced pastrami, i.e. delish. The lads in the kitchen seemed to love their job, so that’s always a good sign! 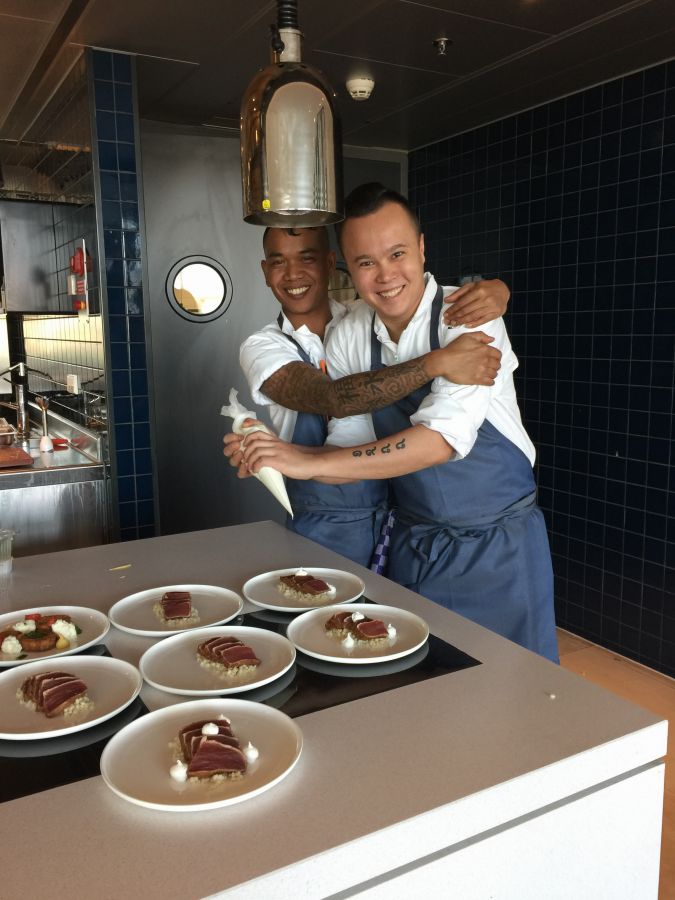 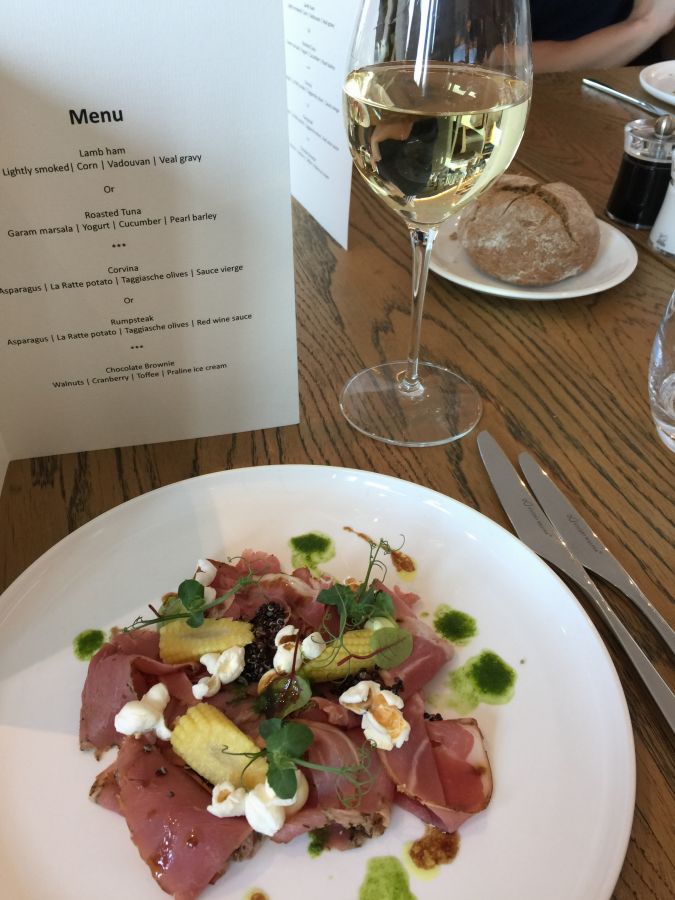 We checked into our hotel, after we accidentally all trundled into the wrong one on the same street (I ran back later for a quick glass of wine on their sunny patio at Freddy’s!). Sugar Sugar bakery had delivered Irish and Amsterdam inspired cup cakes ahead of our arrival at NH Doelen Hotel, one of the oldest hotels in Amsterdam. Five star luxury right in the city centre, Rembrandt’s ‘Night Watch’ was painted there! 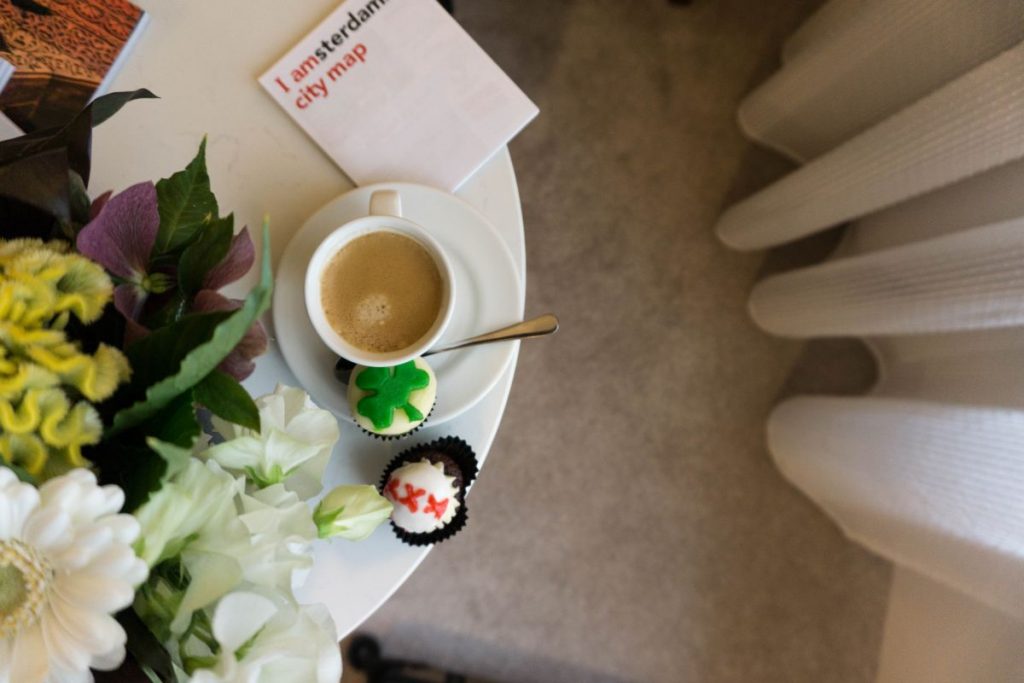 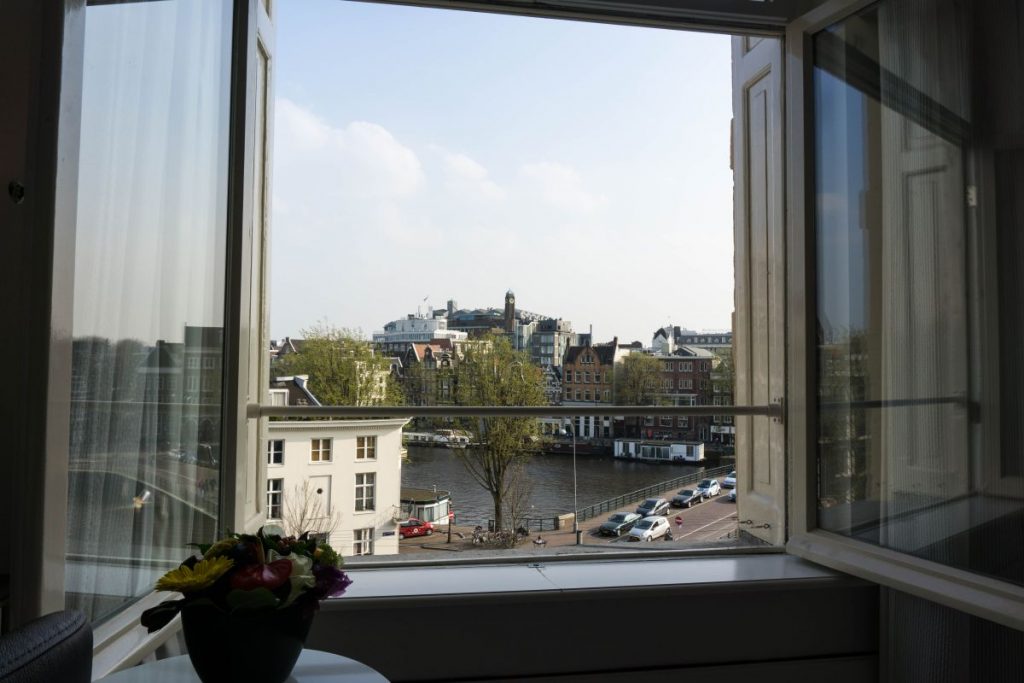 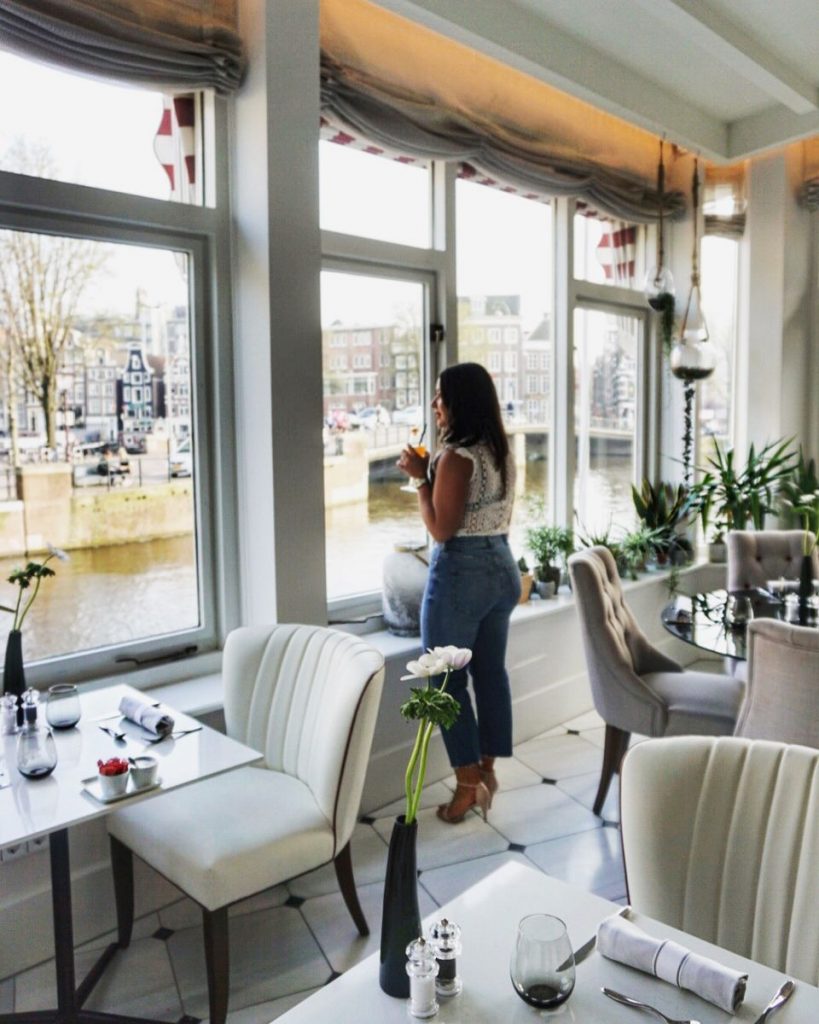 I got seriously lucky with that room with a view and fell in love with the bright and airy restaurant where we’d have breakfast the next morning. But first, it was off for a tour of one of Amsterdam’s most popular tourist attractions, the Heineken Experience. We found out they’d actually visited the Guinness Storehouse for inspiration when creating their interactive tour and I have to say, I think they’ve pipped them at the post. Neither is my favourite drink, nevertheless, I wouldn’t dream of turning down an invitation to a brewery! 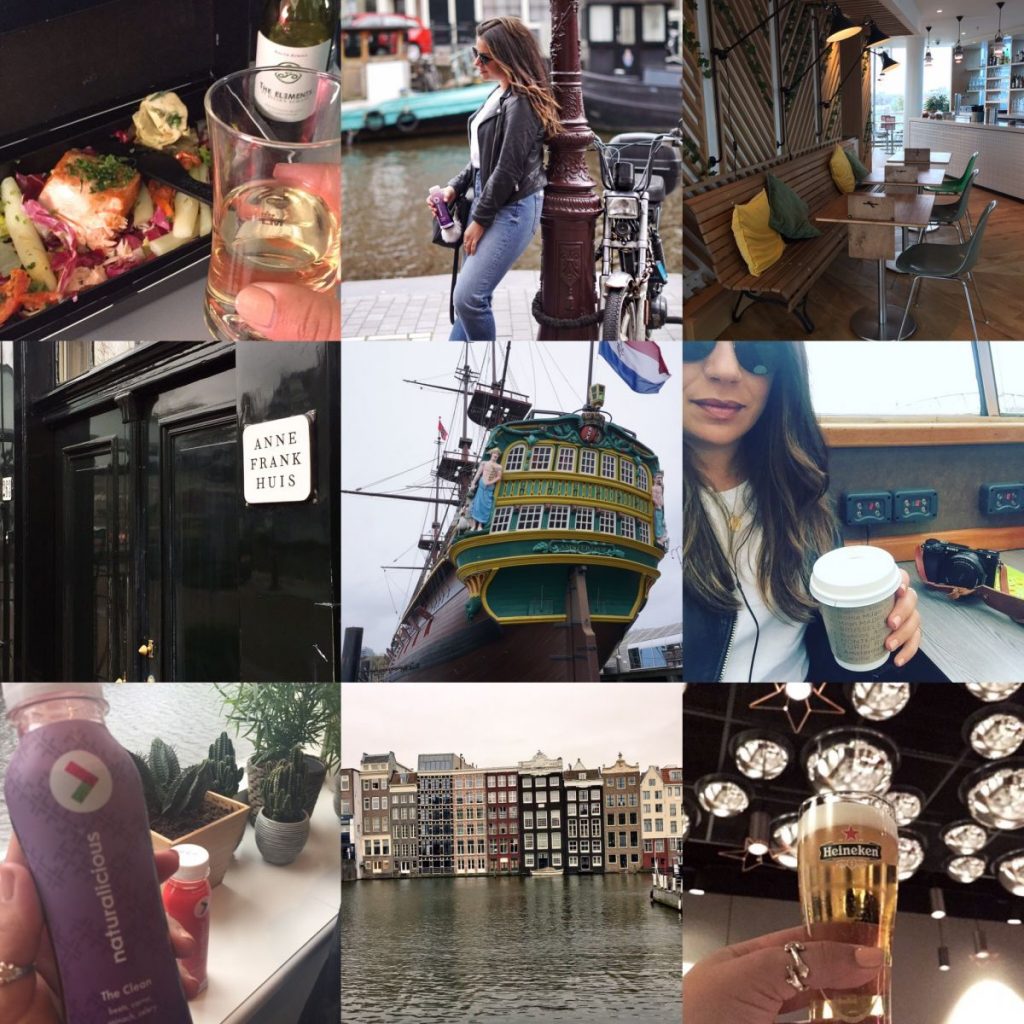 We ate in De Behemel restaurant that evening before heading back to the hotel for cocktails, ask the bar man to mix you up a gin sour with basil – divine!

The next morning I cured the fuzzy head with NH Hotel’s delicious brekkie, buffet if you’re in a hurry or a la carte if you want something made to order, like the spinach omelette I had with an almond milk latte to go. Notions! A Naturalicious juice (they sell healthy snacks too, store here) sealed the deal before heading to the canals for an hour long sightseeing cruise, an Amsterdam must. 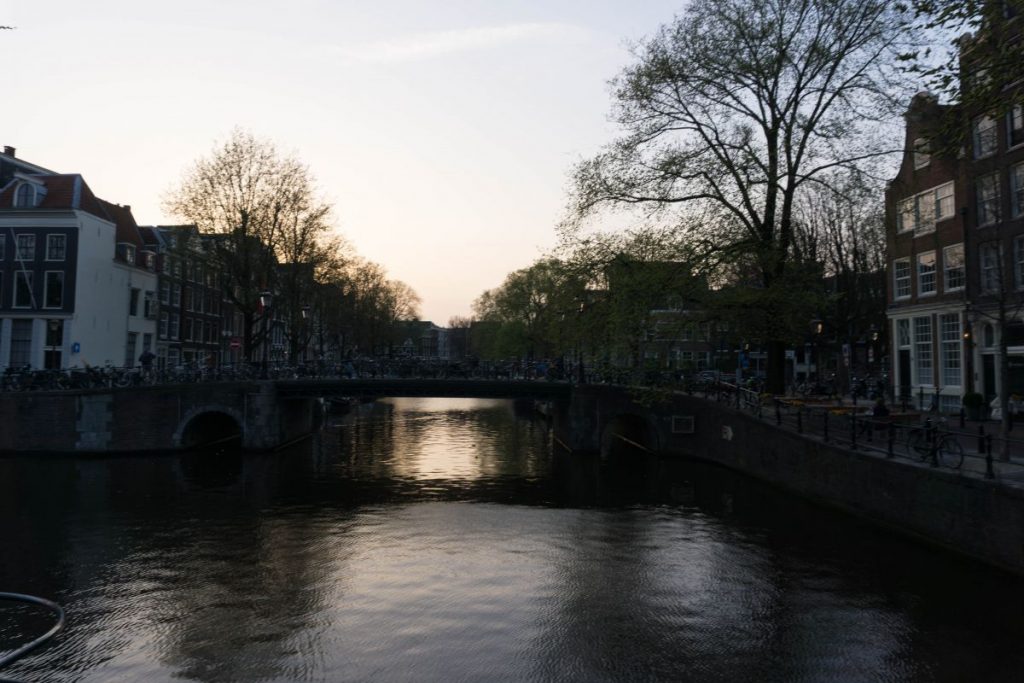 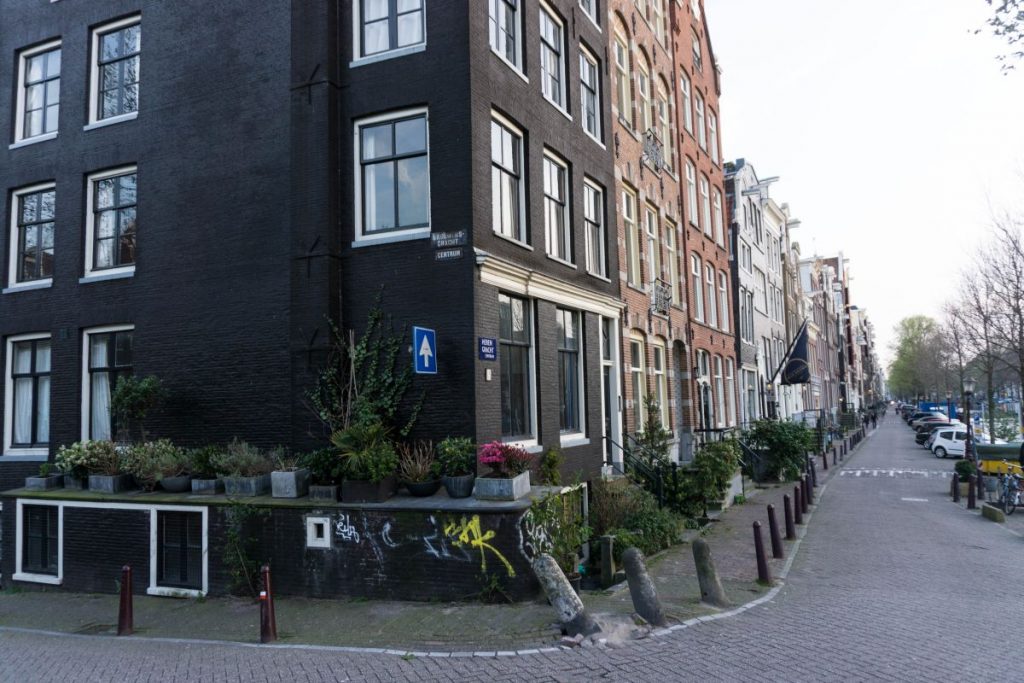 We finished off what felt like a weekend in the city with a visit to the Anne Frank House (buy tickets in advance, the queues are lengthy!) and lunch at Blue Amsterdam which has 360 views from the roof top restaurant (try the tomato soup and meatballs).

KLM crown lounge (which is reopening next year bigger and better to include a roof terrace and Heineken bar) and business class seats with a lovely service (that’s salmon and Sauvignon Blanc in the top left square above) back to Dublin where I was back before 5pm. That my friends is how to do 24 hours in Amsterdam!

Flights from €99 return at klm.com. Check NH Hotels here, but be warned they book up fast for the entire summer season, as do all good hotels in Amsterdam.

What about 48 hours in Berlin? Read all about it here.

Thanks @whereistarablog for patiently taking my pics. Thanks to KLM for organising our itinerary. Check out @iamsterdam for city guides. Schipol info here. All views are, as always, my own.