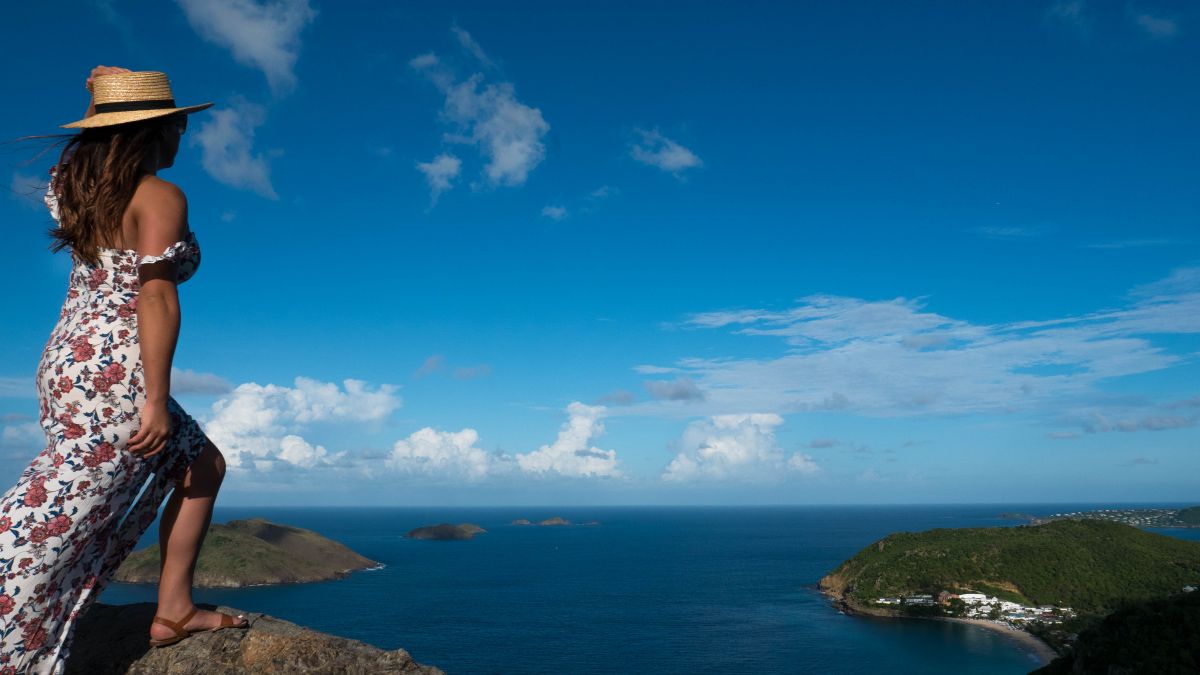 Is this the most stylish hotel I’ve ever stayed in? Probably. Le Guanahani, St. Barth is seriously cool, it oozes chic. Come on, it’s French! The whole island is like the South of France in the Caribbean, but this property steps it up a notch when other hotels still think P Diddy all white is “in”. 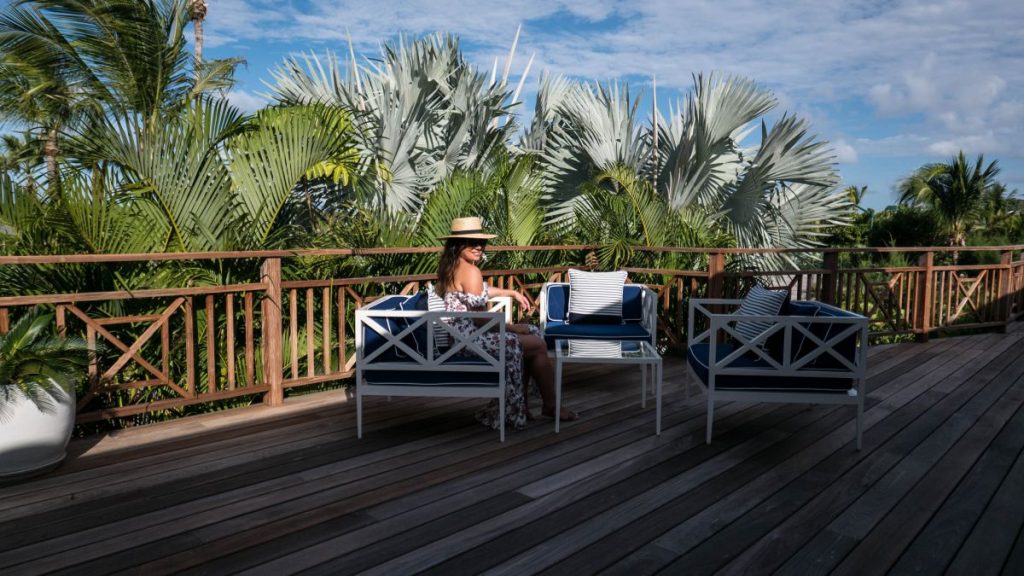 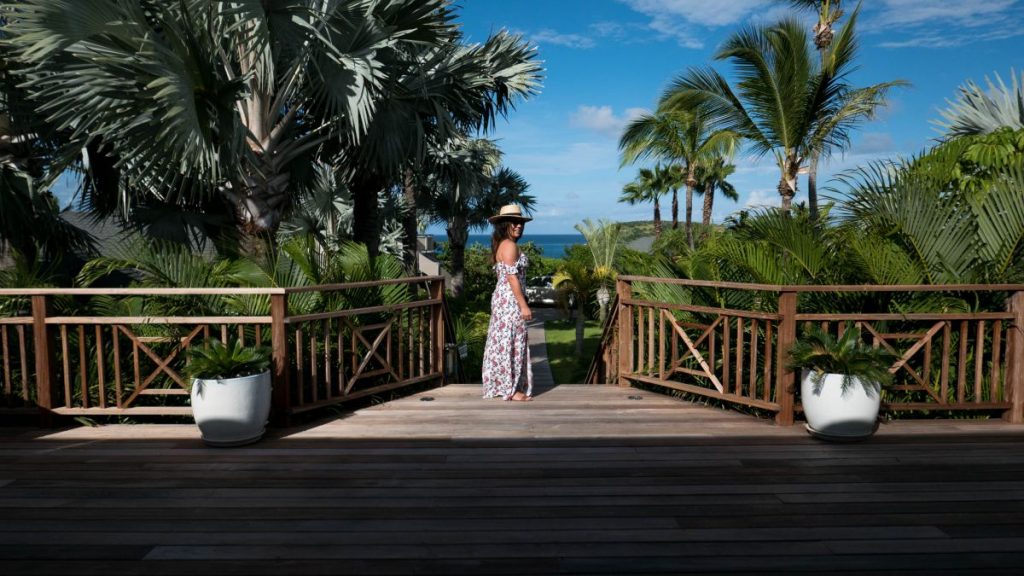 Getting to Le Guanahani is an experience in itself. After flying from London to Antigua with British Airways, a quick plane change to a much smaller aircraft and settling in for a short but breathtaking island-hop, we land at the infamous runway on the 9-square mile St. Barth. 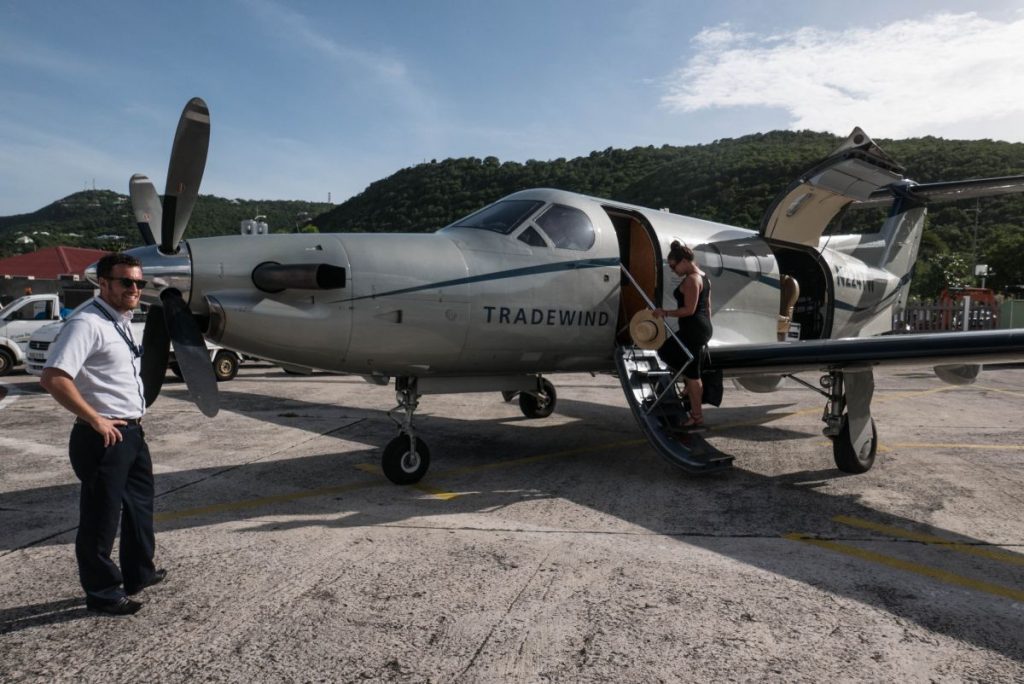 (Fun fact: six weeks later I bumped into that same pilot at the airport in Puerto Rico, I showed him this picture. Scarlet for me.)

After welcome glasses of Laurent Perrier Champagne, we settle in over a feast of the lightest blush wine and not so light truffle everything. First stop, Indigo on the beach, the slightly casual toes in the sand spot at Le Guanahani. I say slightly, because it’s laid back, but still fancy AF. Everyone is beautiful here, including the staff, the families, their kids who politely wave ‘bonjour’ as you walk around the property, everyone. I make mental notes to swap my entire suitcase with the contents of the boutique at the hotel. 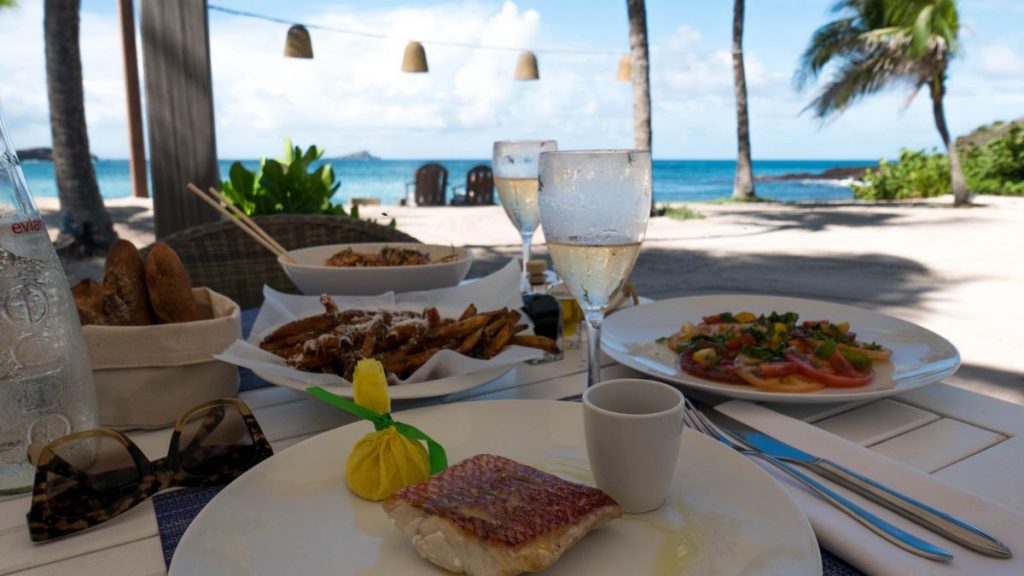 Sunset is unsurprisingly spectacular, from every angle, on the seemingly deserted beach(es). The property occupies so much land, (18 acres on its own peninsula) it won’t ever feel cramped. It’s also the only hotel on the island with two pools and two beaches! 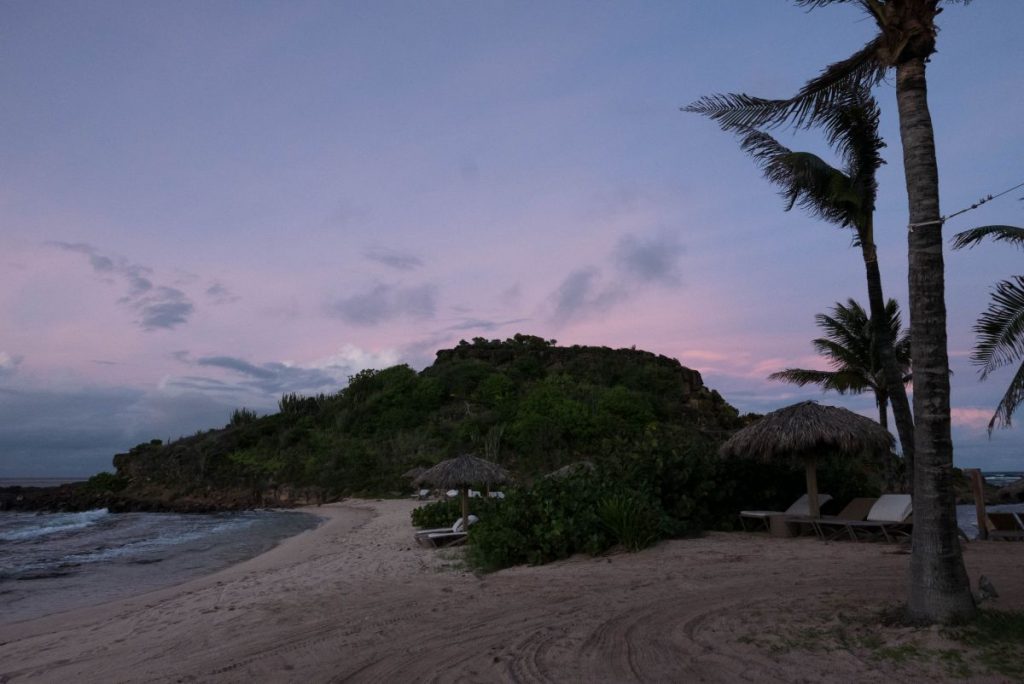 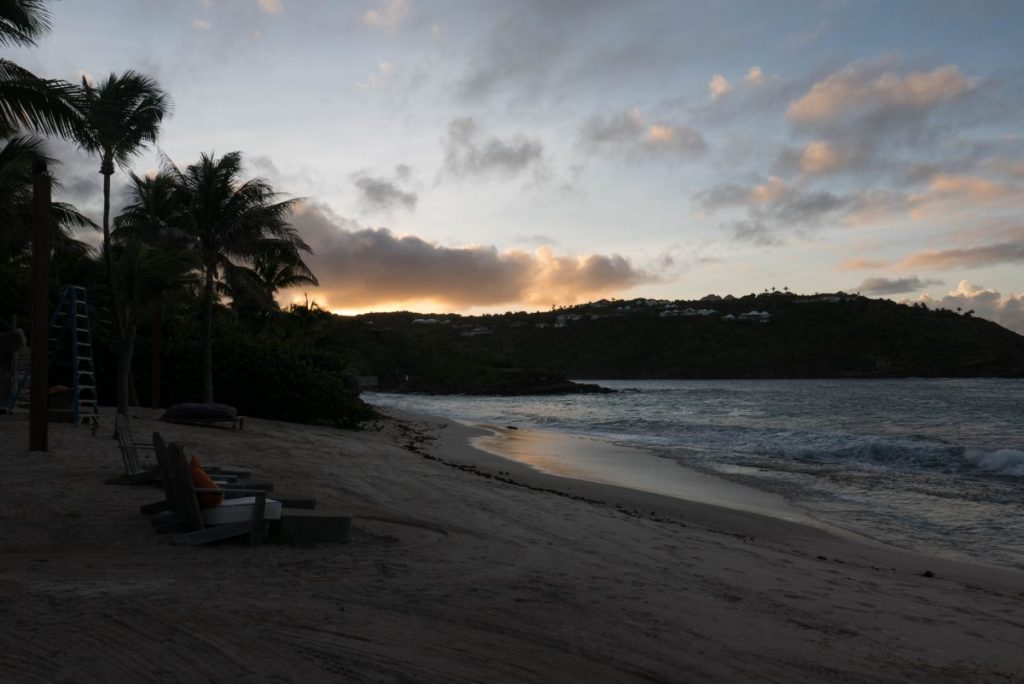 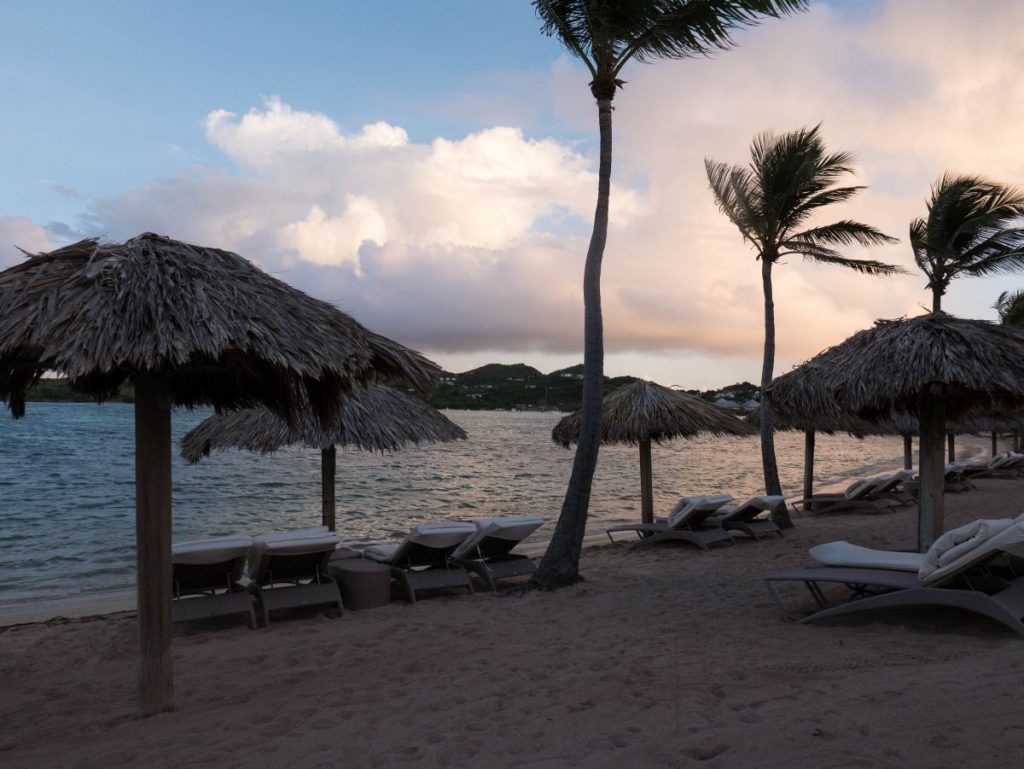 The thirty-something colourful cottages are nicely spaced out and extremely private. It really is the ultimate in casual barefoot luxury, so I needed the full experience. Leading me to order the most extravagant breakfast by my private pool in the sun, because why not? There’s nothing more indulgent than room service brekkie, but when it comes with champers and is enjoyed with your toes in the water? Winner winner. And yes, all that was just for me. (More about this floral slip). 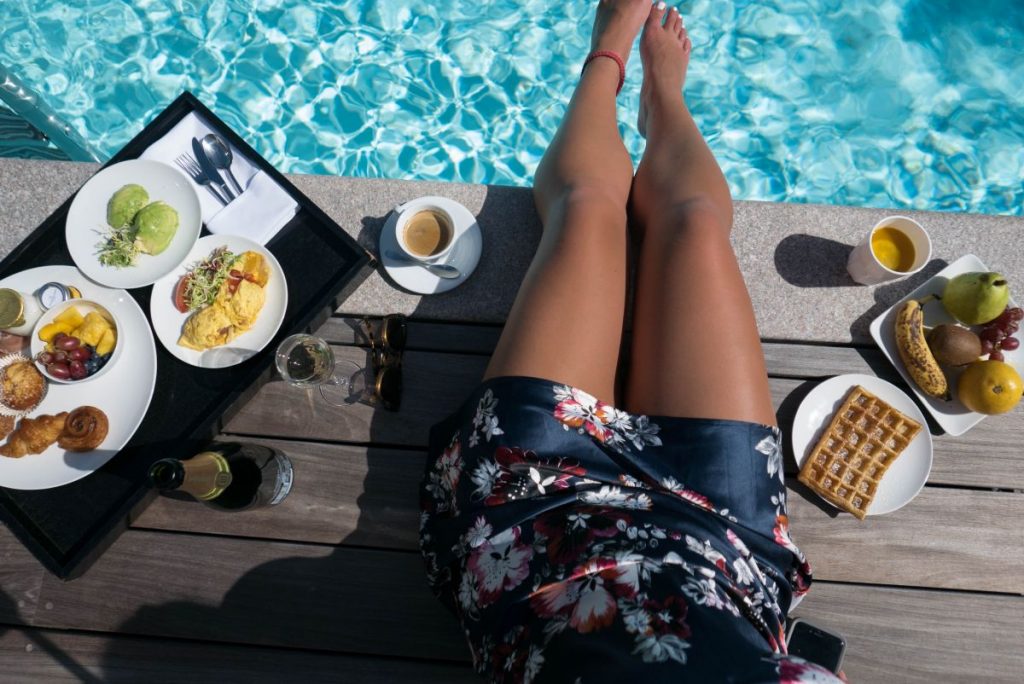 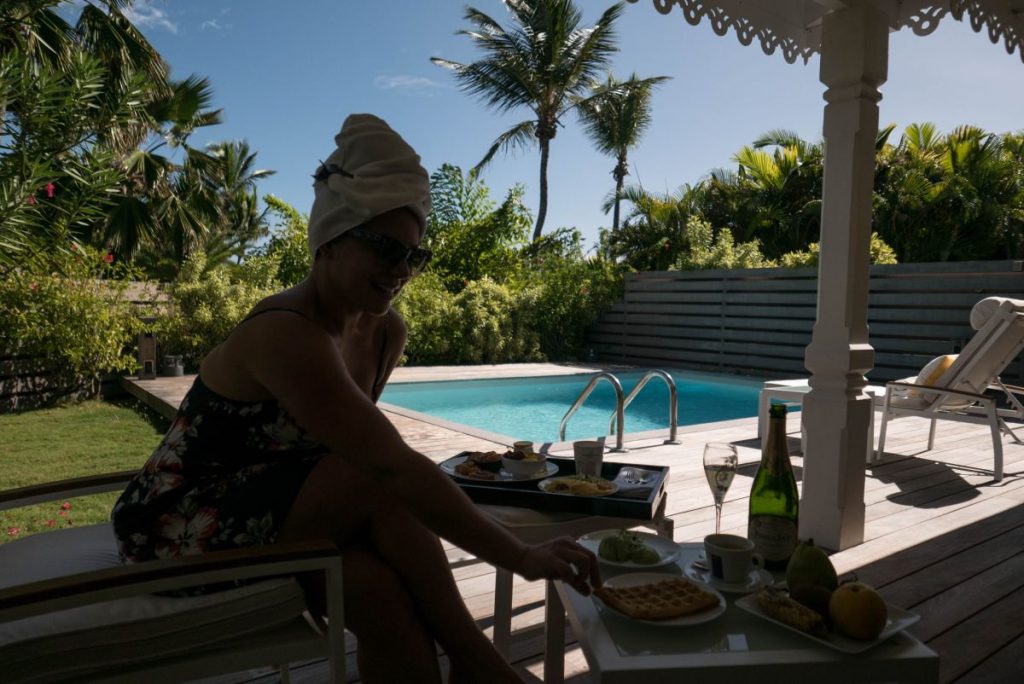 You’re actively encouraged to get off the hotel grounds, to experience all St. Barth has to offer. That doesn’t mean you can’t still enjoy Le Guanahani’s top notch gastronomy though. Oh no! Our catamaran trip around the island came with the most lavish “picnic” set up I’ve ever seen. 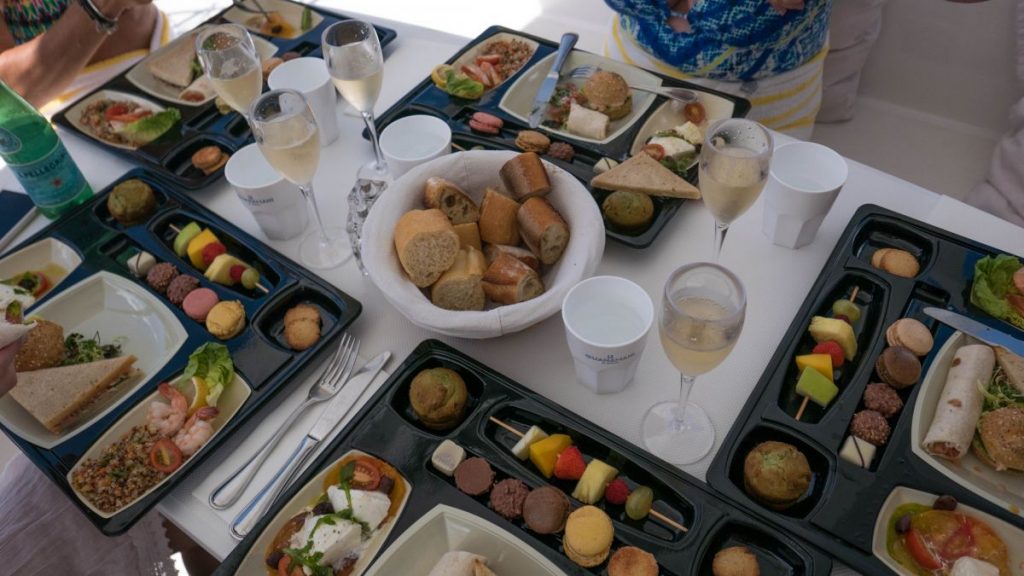 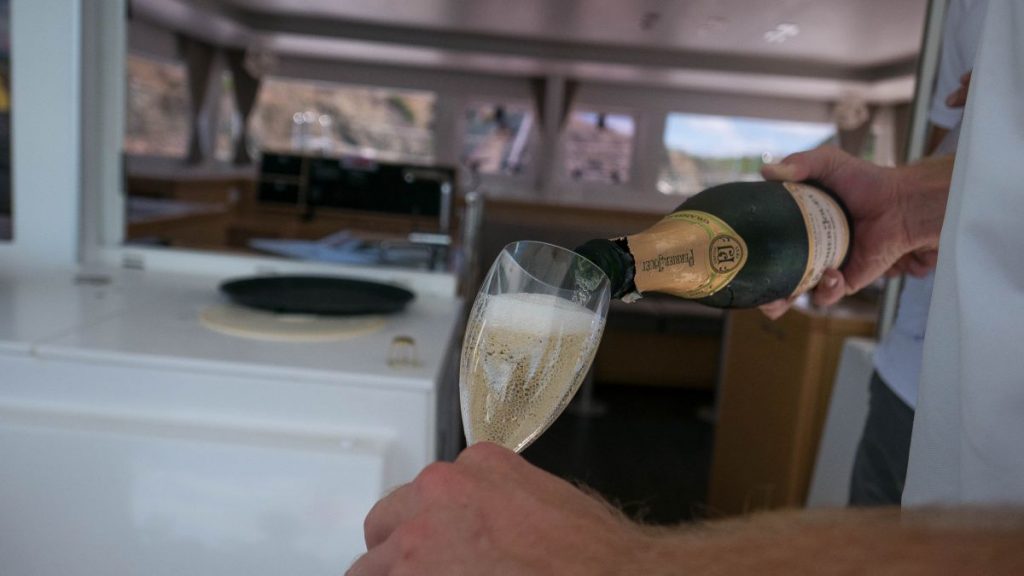 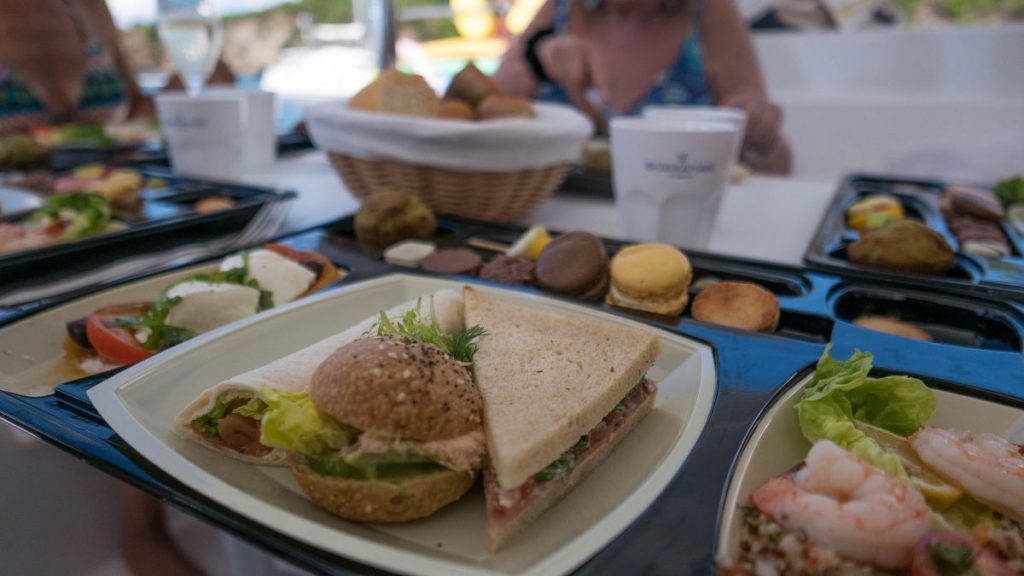 Dropping anchor at Colombier to snorkel with sea turtles, sting rays and some kind of baby reef shark definitely helped work up an appetite and after polishing off everything on my tray (three types of sandwiches, two salads, fresh bread, no less than six types of homemade sweets and of course Champagne), there was nothing left to do but laze on the nets for the return journey. Wait, not even the nets, giant bean bags ON the nets. Bliss. 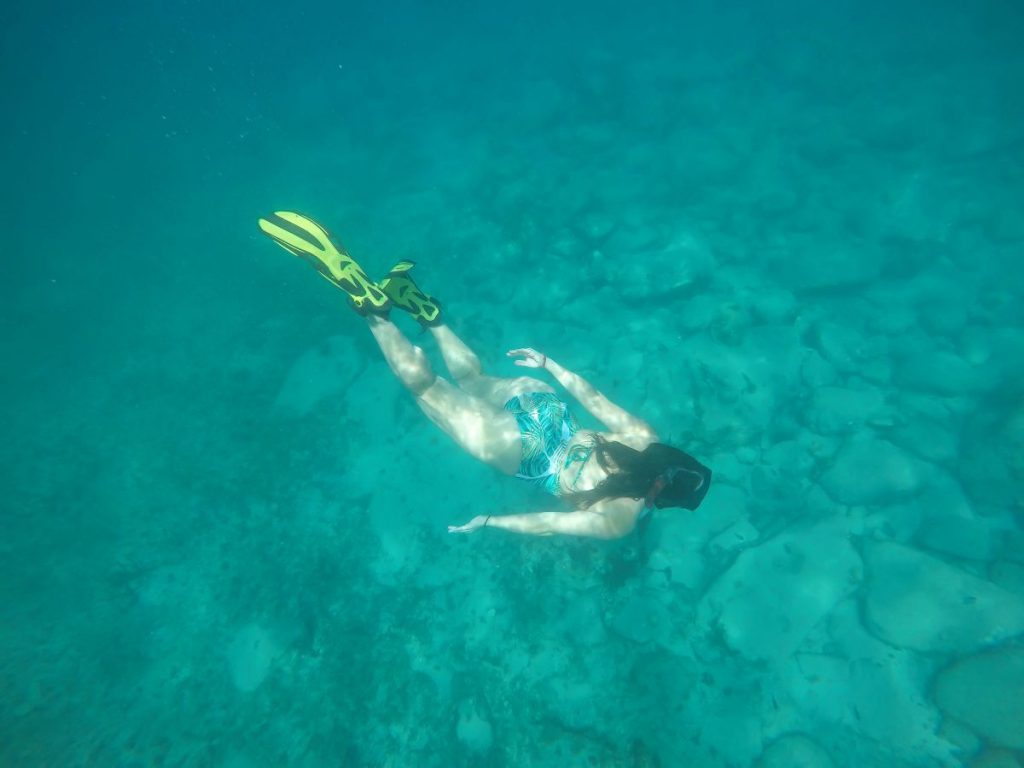 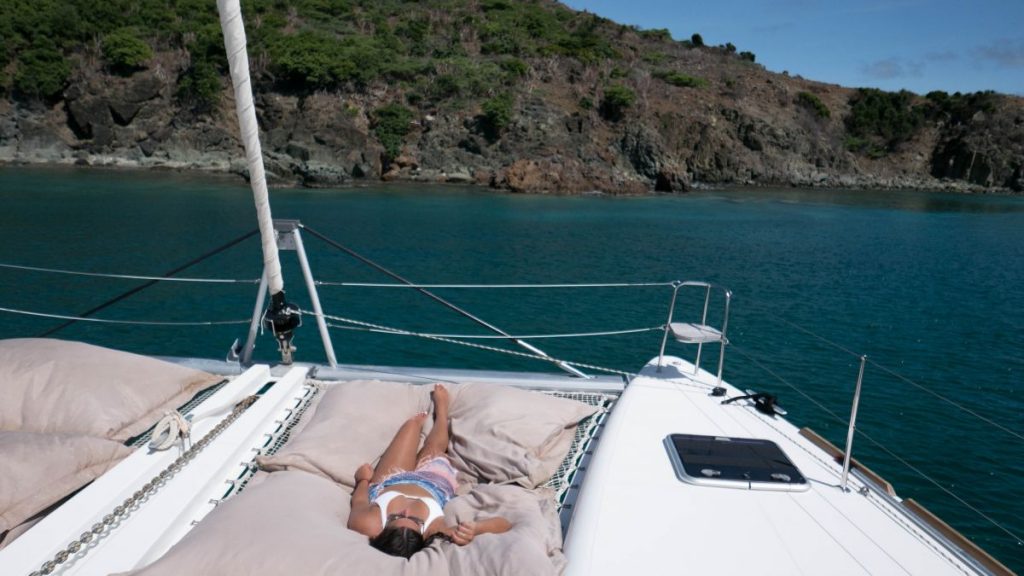 Back at the hotel and still feeling all water-sporty, I took advantage of the SUP stand and the gentle waves the instructor said we wouldn’t be able to manage. Determined to prove him wrong, we got approximately twenty feet out, took some pics and retreated, tails between our legs, to the safety of smokey mezcal cocktails on the beach. 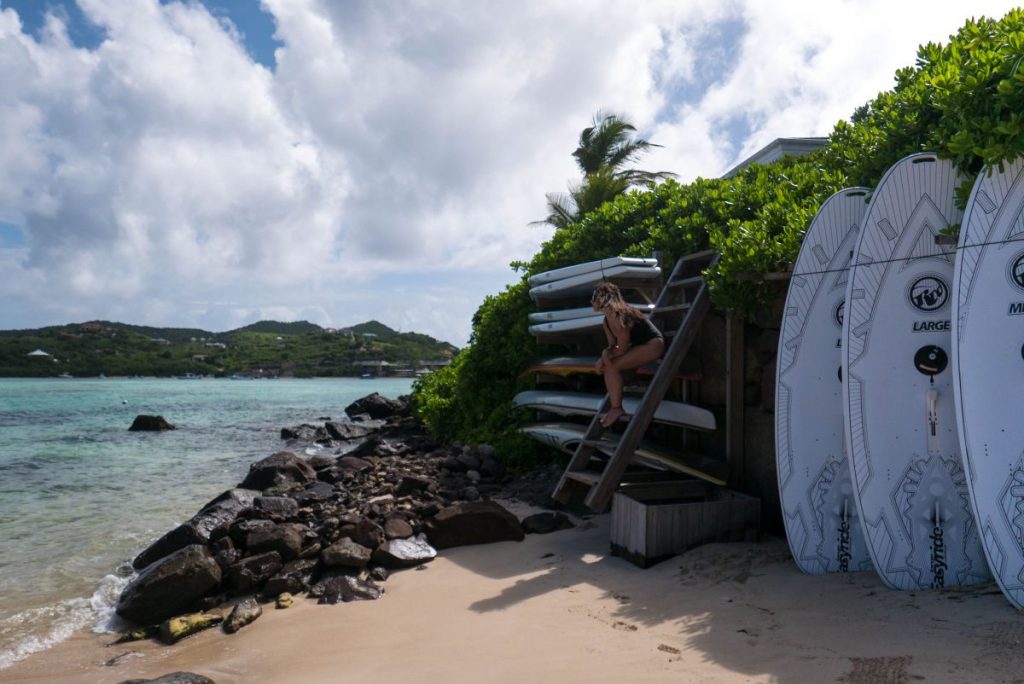 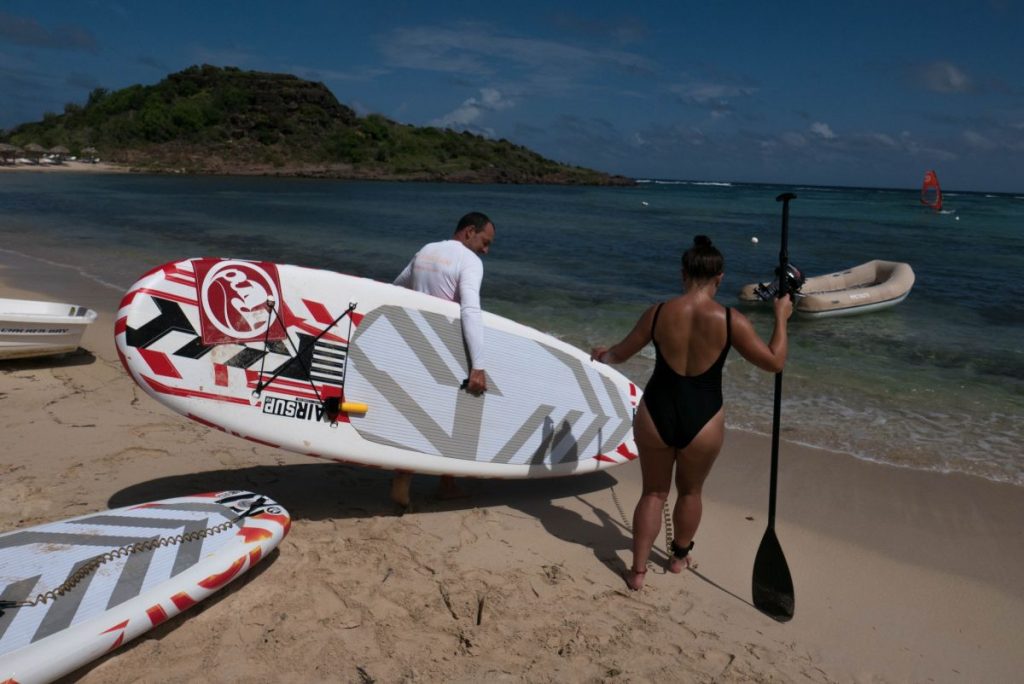 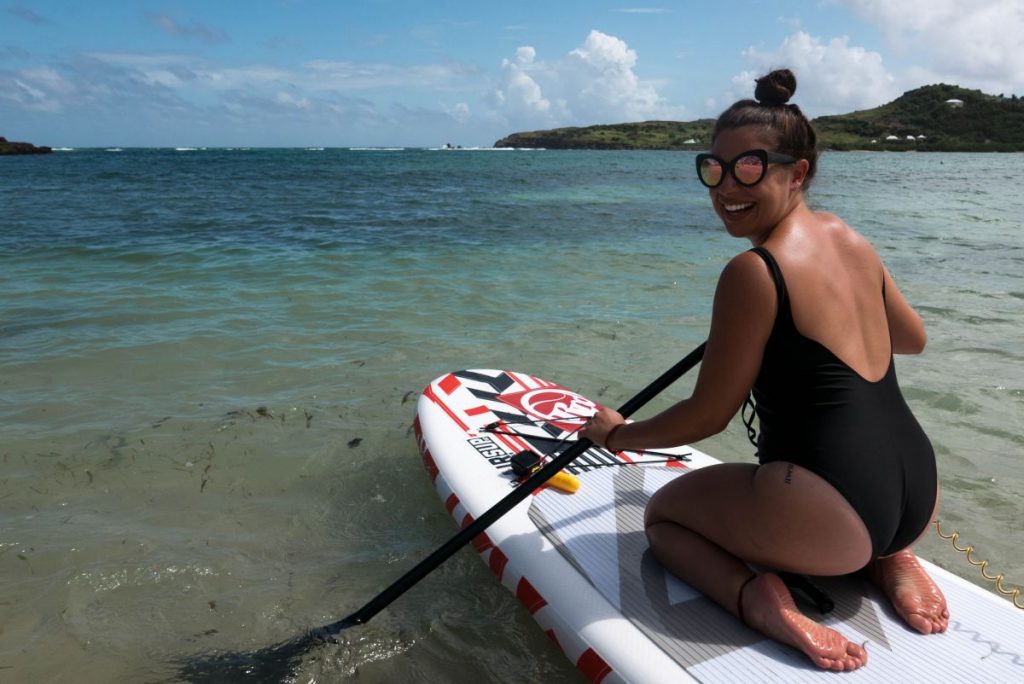 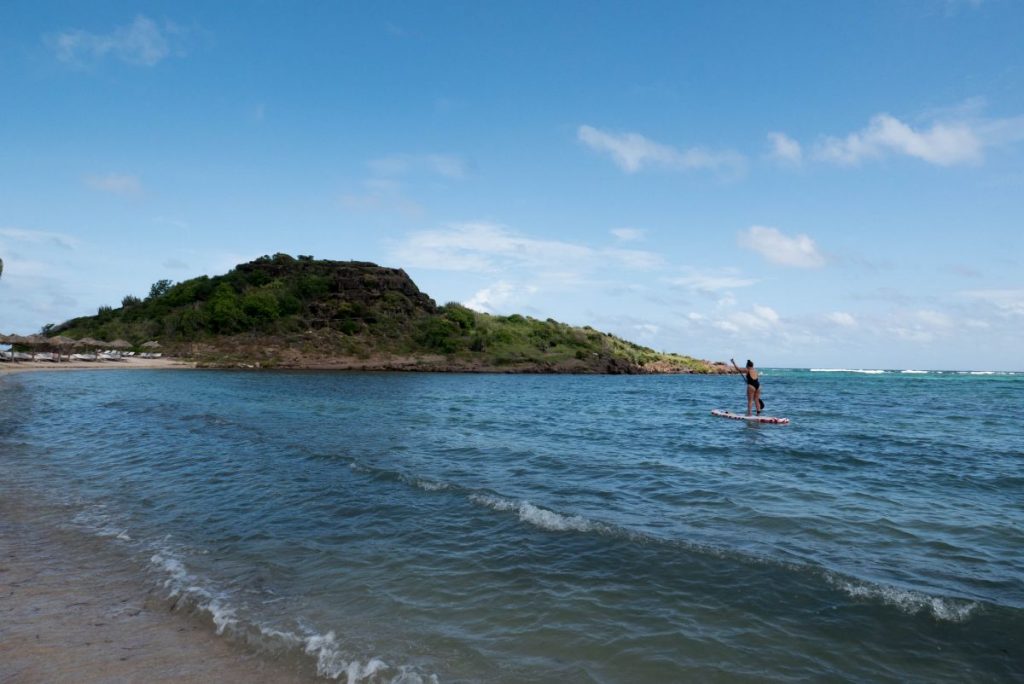 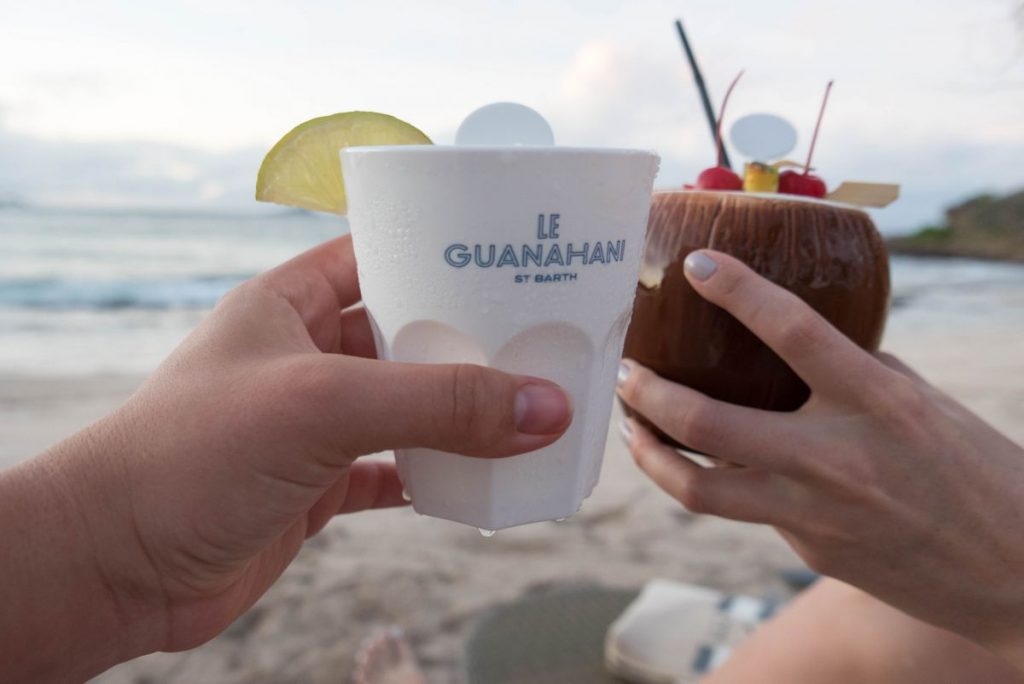 Wait, I haven’t told you about the pool yet, have I? 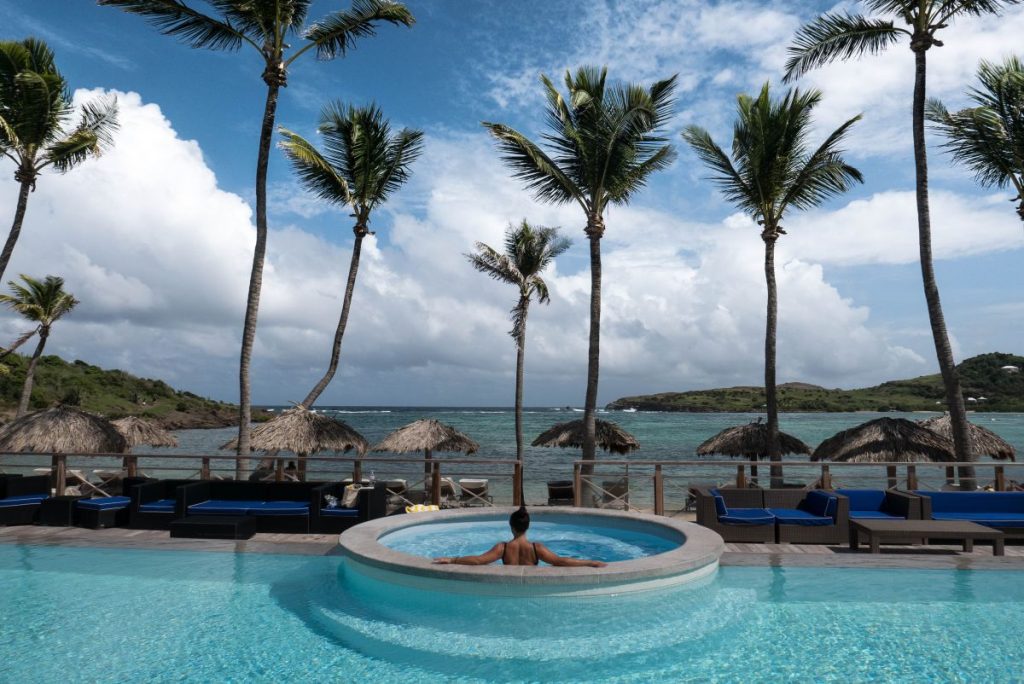 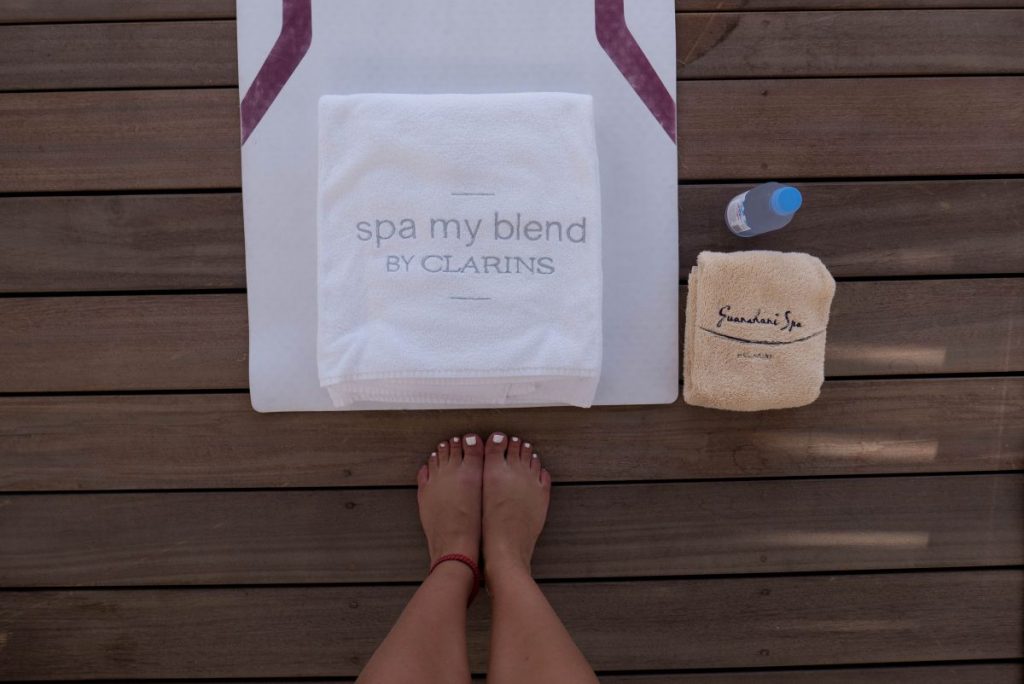 ….or the baby tortoises… 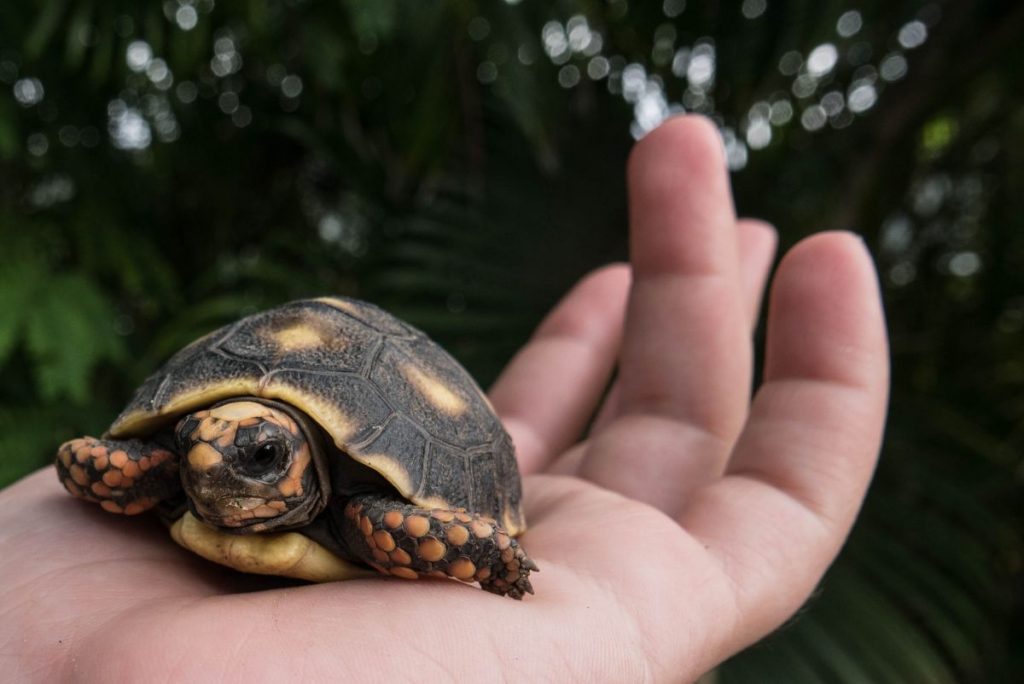 Yikes, this is a photo heavy post – but it’s just that good, I don’t want to leave anything out. Indigo restaurant overlooks the pool, which overlooks the beach. That’s where you’ll have breakfast. Go in your swim stuff so you can jump straight in after. The Clarins spa is the largest on the island and surprise, has its own pool too. Yoga on the wooden platform followed by a full body massage was heaven. Maybe do that before breakfast. Honestly, my days were filled with decided what activities to do around which meals…so that I wouldn’t miss anything. FOMO. 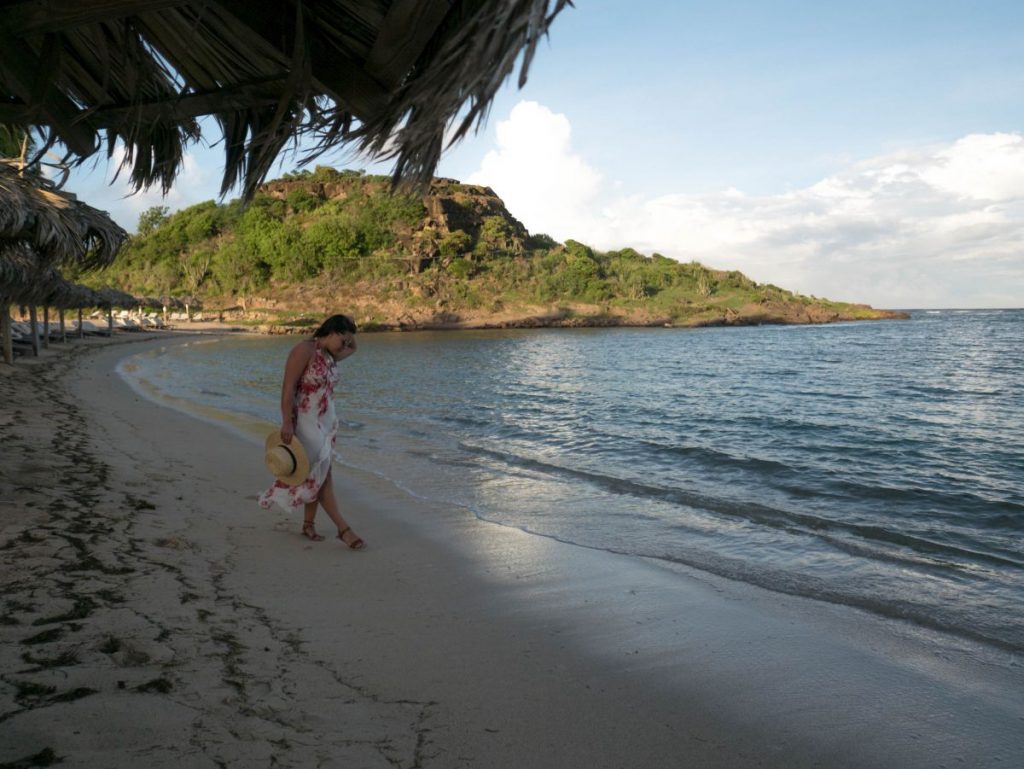 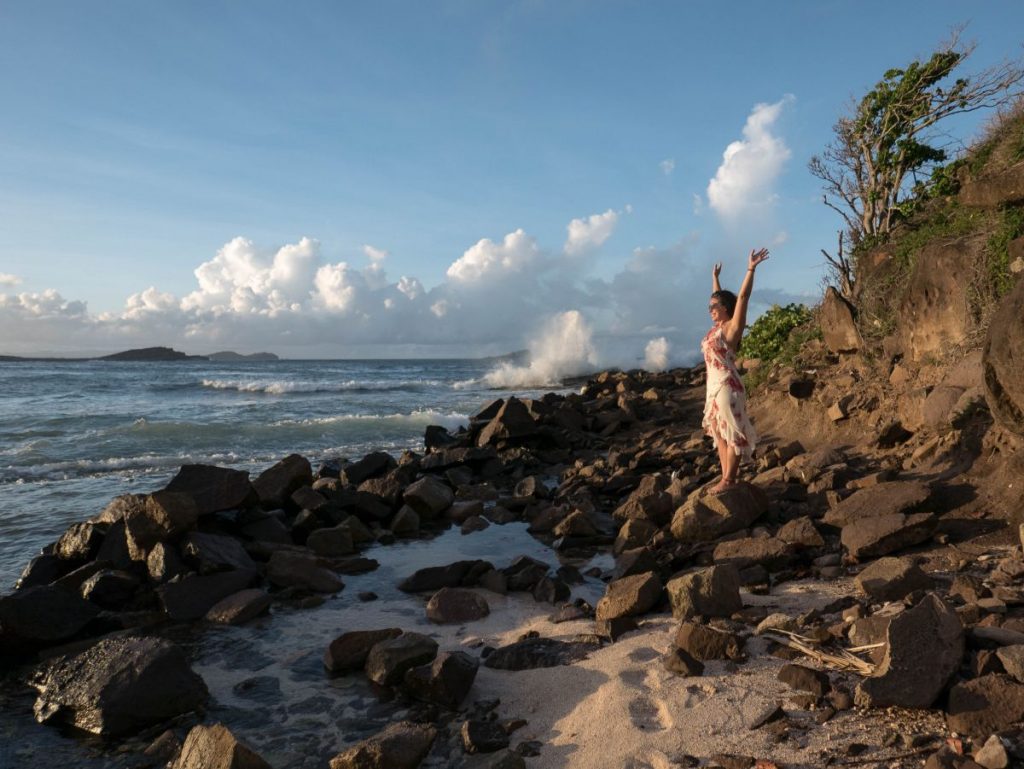 The hotel’s interior was designed with the traveller in mind. Designer Luis Pons has explorer influences on every surface, from Panama hat woven into the furniture, to vintage style trunks making up the front desk, it’s no wonder Victoria’s Secret has held its photo shoots at Le Guanahani for the past 20 years.

After six weeks island hopping around the Caribbean, this island and this hotel are still top of my mind and tough to beat! 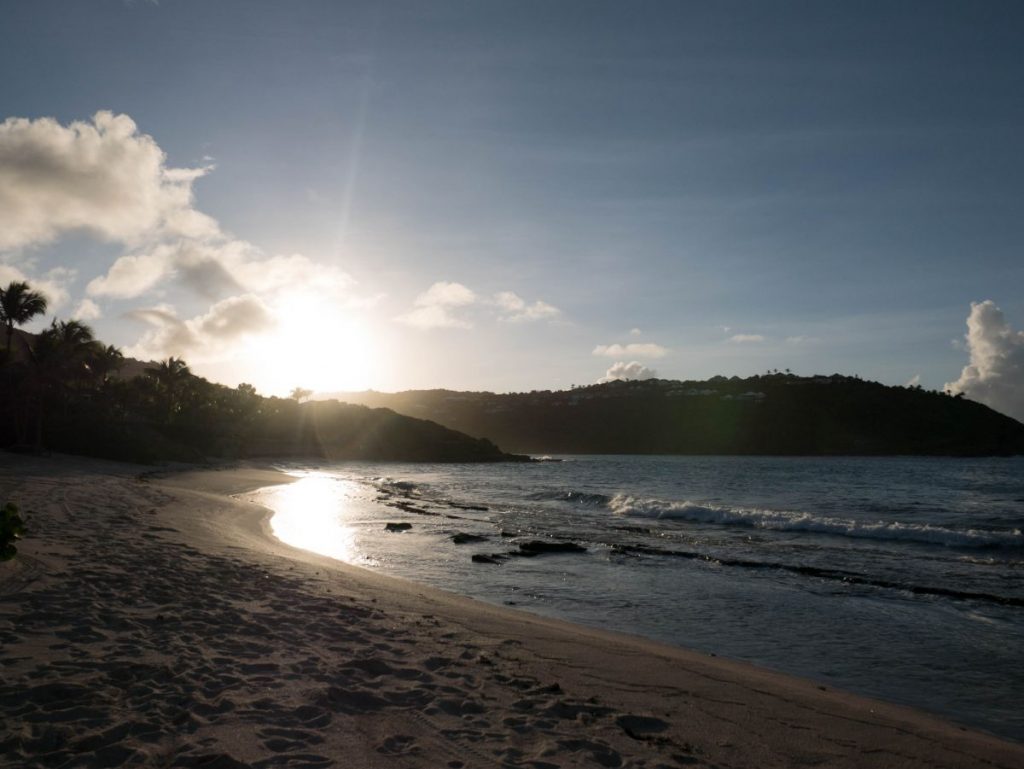 The currency in St. Barth is Euro, but you can also use U.S Dollars and major credit cards are accepted in most places.

Rates at Le Guanahani start from €625 per night based on two people sharing an Ocean Bay room, including breakfast. To book visit www.leguanahani.com

Thanks to Le Guanahani for hosting me. All views are, as always, my own.