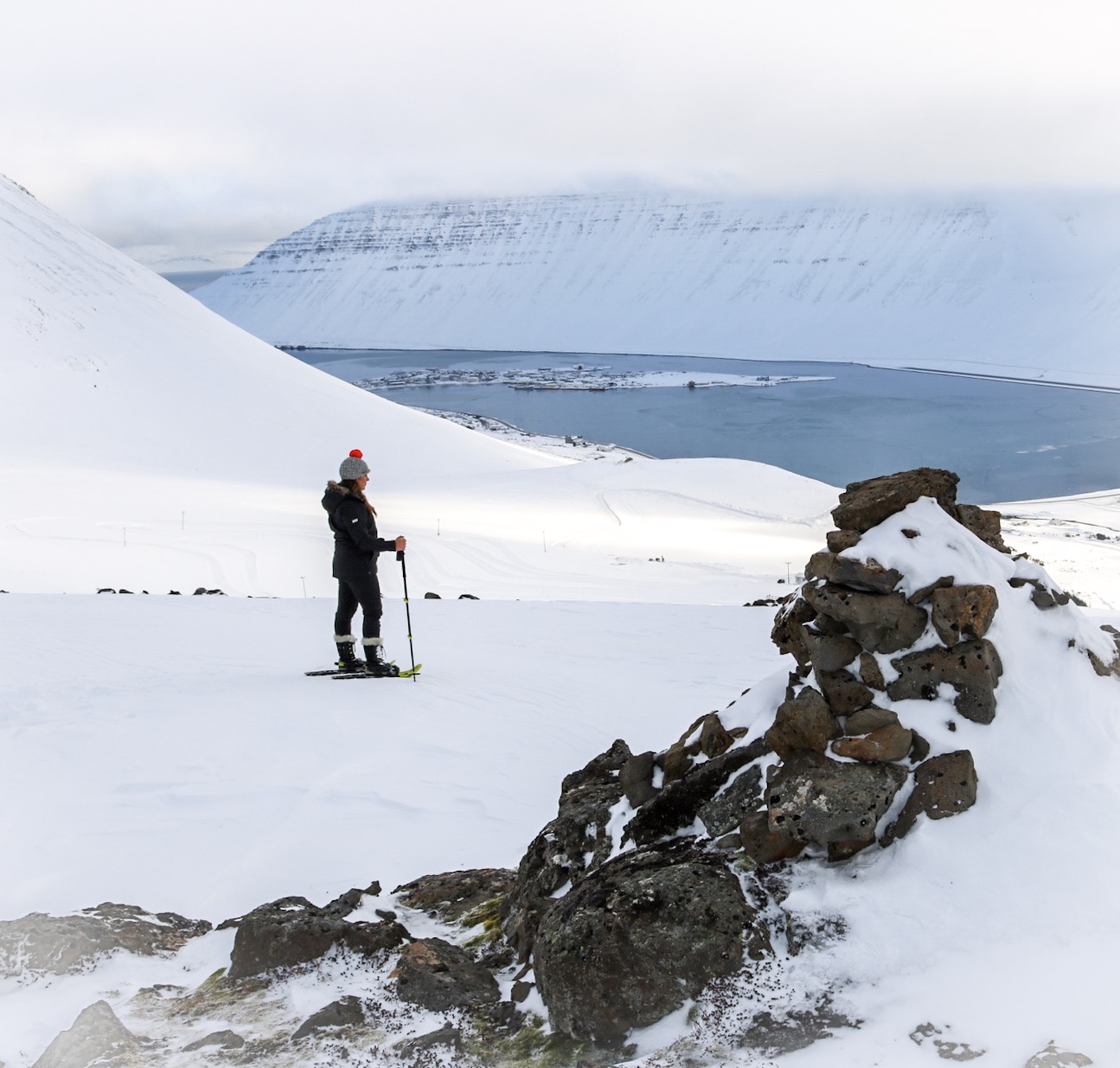 Before my first trip there, I had no idea what to pack for winter in Iceland. It just looks so cold, but it was actually the same temperature as Ireland the week I went and I flounce about Dublin all winter (and summer for that matter) in just a leather jacket. Would I need thermals and a base layer? Specialist boots for snow and ice? Ski clothes for snowshoeing? Fancy stuff for going out at night in Reykjavik? I hadn’t a clue. Now, I’m much more confident and ready to share my tips about what to pack for winter in Iceland.

I flew into Reykjavik then transferred to the domestic airport for my flight to Isafjordur in the Westfjords, which is one of the most remote parts of the country. I arrived in “normal” clothes that I’d wear at home, t shirt, biker jacket, skinny jeans and leather boots in the middle of February to zero degree weather, but with some sunshine. I only needed a scarf to keep warm with my cup of tea while waiting for the bus. So far, so good.

When the sun isn’t shining or there’s a breeze you need to think about wind chill and landing in Isafjordur it felt considerably cooler than the capital, even though the temperature was pretty much the same.

I also noticed they don’t really clear the runway, so my city boots were a bit slippy and it was time to change into something a bit more grippy. I received an order from Helly Hansen, the Norwegian ski and sail brand, before I left and proper snow boots were first on my list. My feet are always freeeezing, even at home with the heating on full whack, so it was important I had the right footwear for the kind of terrain I’d be in for the next few days.

I think I was about the only tourist in the town, so I didn’t need to be sliding all over the place showing myself up, walking became a lot easier when I switched to these HH boots

My hotel cleared the pavement in front of the entrance, but pretty much everywhere else was covered in deep snow or ice, even right up to the door of the (one open) bar and the bakery in town.

If you don’t want to invest in snow boots (although you should because they’re insulated and 100% waterproof) then you should at least buy the clip on grips for your shoes, Amazon has loads of options (below). Either way,  you need something above calf height if you’re anywhere in Iceland in winter that isn’t built up i.e. where the snow hasn’t been cleared.

Everyone but the locals wears gloves at all times outdoors, they must be used to it because even taking them off for a minute to use my camera and I couldn’t feel my fingers. I felt like a million tiny knives were stabbing my skin with a stinging/numbing sensation. If you want to be able to use your devices, then go for something like one of these pairs of smart fingertip gloves.

Keeping with accessories, you’ll want at least a hat and probably a scarf too, but I noticed lots of people were wearing Buff neck warmers which you can wear loads of different ways and they sell them everywhere during winter in Iceland. If you get too warm you can just wrap it around your wrist. Everyone wears less practical but more fancy furries back in Reykjavik. Decide which is more important to you, I chose comfort and practicality, sprinkled with a little bit of decoration.

The glare of the bright white snow can be very tiring on your eyes, so polarised sunglasses are your best bet.

When it comes to clothes, here’s what not to wear: ripped jeans. Yeah, I know, that’s pretty obvious and I don’t know what I was thinking, but I didn’t know what to pack for a winter week in Iceland, so just don’t make the same mistake as me. They were fine for the Wake Up Reykjavik bar crawl, but not so much in knee-deep snow at Heydalur in the Westfjords playing with the horses. If you follow my Instagram story, you will have seen me drying both my jeans and my knees with the hairdryer. Not ideal.

For outdoorsy stuff, I went for Helly Hansen’s slim fit ski pants. I wore them snow shoeing, sea kayaking and on the Golden Circle tour where you were pretty exposed to the elements and they kept me warm and dry on all occasions (sounds like a bad baby’s nappy ad!). They aren’t the type that hideously cover your boots in a sort of dodgy flare adding 5 inches to each leg look, they’re more like water-resistant thick black leggings that you can tuck in, ideal.

Thermals and stuff? Not really if you’ve got the right coat and accessories. Of course it can get much colder than when I was there, but speaking to lots of locals the temperature rarely drops to crazy lows like you’d find in Canada during winter in Iceland (unless it’s during a storm). In fact, during my snow shoeing trek, I had to stop to peel off a layer even though we were rising in altitude the activities warm you up. You want to have something ready to throw on if you’re stationary or the sun’s not out though.

Back in the city, normal clothes and shoes are fine if you’re just going out downtown but you’ll still want to be wearing your big coat plus gloves and maybe a hat. Some paths or sidewalks can still be slippy, so consider this when choosing your footwear!

If you’re venturing out at night to chase the Northern Lights or if you’re going on a tour to the Geysers or National Park where there’s more of an open landscape, then that’s when you really want to wrap up and wear all your layers.

If you’re planning a trip to Iceland in the summer, check out this guide.

To summarise, here’s a list of what to pack for winter in Iceland: